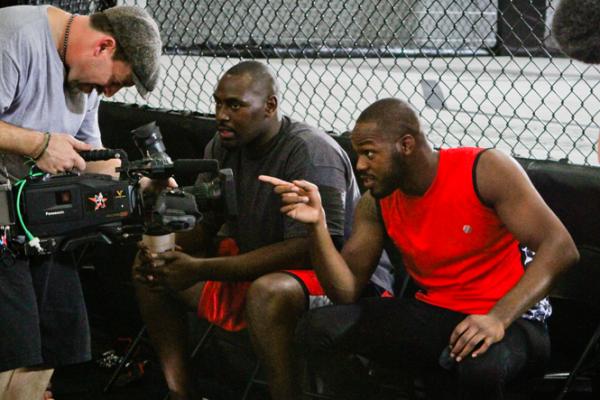 Everyone answers to somebody, so we, the staff at Sherdog.com, have decided to defer to our readers.

“The Doggy Bag” gives you the opportunity to speak about what is on your mind from time to time. Our reporters, columnists, radio hosts and editors will chime in with their answers and thoughts, so keep the emails coming.

Ever since UFC President Dana White revealed on Tuesday that Jon Jones and Chael Sonnen would coach opposite one another on “The Ultimate Fighter” Season 17, culminating in an April 2013 light heavyweight title clash between the two, your emails have been pouring in. This week, we witness the diversity and nuance of opinions over what will be one of the biggest bouts of next year, with each voice expressing a different pitch and tone.

Some of you can’t believe that Sonnen, coming off of a loss and with no 205-pound wins in years, is getting a title shot. “Is this pro-wrestling?!” the voices cry. Some folks appreciate that the UFC is trying to put together fights that get attention but have to wonder if “The Ultimate Fighter” is not playing an undue, injurious role in this whole episode, as well. Could Jones-Sonnen be a last stand for the reality franchise?

In addition, many of you have not forgotten about Lyoto Machida and Dan Henderson and remain curious about their situations. Speaking of curiosity, others wonder just how White is going to try to sell this fight once he starts the media blitz, since most see Sonnen as a prohibitive underdog. However, so too was Stephan Bonnar, and some onlookers were willing to make a case for him against Anderson Silva. That behavior has some of you asking another question: did Georges St. Pierre and Matt Serra forever screw up how we understand mismatches? We’re told “anything” can happen in MMA, but how often does it really?

Then again, who thought that onetime journeyman Sonnen would have his third UFC title shot in a second weight class when he screaming in the clutches of Renato Sobral?

Bonnar is barely in the grave and now White is lining up Jones-Sonnen? Even if you think Sonnen is an interesting fight for Jones (which he's not), he is coming off of a loss and hasn't fought in the weight class for half of a decade. I thought White was mad at Jones after the UFC 151 cancellation. Now Sonnen is going to get embarrassed, again, by a superior fighter. Why couldn't they just have waited for him to beat Forrest Griffin? That would at least make it look like they're trying to be legit instead of pure pro wrestling. -- Mike from Boulder

Mike Whitman, news editor: I honestly think people are overreacting about this whole thing. If you think this sport has been about anything other than making money since its introduction to the United States as a pay-per-view infomercial for Gracie jiu-jitsu, then you must not have been paying attention.

When exactly has MMA been this bastion of fairness and legitimacy to which everyone continues to refer? Was it legit when Rorion Gracie threw Art Jimmerson into the deep end of the pool with no water wings (editor’s note: he did have a glove, Mike) against Royce Gracie at UFC 1 just to prove a point? Was it legit when Anthony Macias allegedly took a dive for Oleg Taktarov at UFC 6 to set up a meeting with David Abbott in the tournament final? How about when a retired Randy Couture -- who hadn’t fought at heavyweight in more than four years, by the way -- was called up out of nowhere to challenge Tim Sylvia because the UFC heavyweight division was so paper thin?

How about when Brock Lesnar -- who would become the company’s biggest draw, not so coincidentally -- was given a heavyweight title shot in just his fourth pro fight after going 1-1 to start his UFC career? How about when the UFC tried to sell us on the idea that Nate Quarry, David Loiseau, Dan Hardy, Thales Leites and Patrick Cote had one single chance in hell of actually winning a world title? How about when Griffin and Rashad Evans were allowed to keep their jobs after making rape jokes, but Miguel Torres -- a far less profitable draw in spite of the fact that he was also a former world champion -- was curiously fired and then rehired? Is it legit that Jon Fitch has been left out in the cold, despite being arguably the second-best welterweight in the world for years? Is it legit that some fighters take performance-enhancing drugs to become bigger, faster and stronger?

This is all a show, people. It has always been a show. The fact that we have occasionally been allowed to watch the best fight the best has been a secondary bonus that was only allowed because the promoter thought it would draw money.

I have never understood the need for some MMA fans to dump on pro wrestling. I really hate to break it to all the elitists out there, but MMA and pro wrestling are more alike than they are different, and not just because of the catch and pro wrestling lineage. In Japan, the two have pretty much gone together like peas and carrots, after all.

Remember how we all hated watching Alistair Overeem carry that giant, awesome Thor hammer to the Pride Fighting Championships ring and how stupid it was that Sergei Kharitonov donned his Russian military garb like some bad guy character from “Street Fighter II” during his walkouts? Oh, wait, we didn’t hate those things?

For God’s sake, even the UFC had a straight World Wrestling Entertainment-style entrance ramp at one point and so did Pride. Strikeforce still has one. More recently, Tom Lawlor’s impressions of Dan Severn, Harold Howard, Genki Sudo, Hulk Hogan and Jimmerson have made him a big-time fan favorite, despite his 4-3 promotional record.

Is any of this making sense? Other than the actual combat, nearly every other aspect of this sport is a work. The booking, the marketing and, yes, the media coverage all serve to make the MMA game a successful entertainment property first and foremost. It is not only how the people in those positions stay employed, but it is also one of the major reasons why this sport has millions of fans.

MMA was created and marketed in this country as a means to make money, and that is the ultimate constant, for better or worse. It is irrelevant whether Sonnen deserves to challenge Jones in April. The fact is, “The Ultimate Fighter” will temporarily improve its currently lousy ratings on FX, and then the title fight might do a million pay-per-view buys. That is all that matters, and that is all that has ever mattered.