TOYKO -- With Alistair Overeem calling opponent Mirko "Cro Cop" Filipovic “old” and “a chicken” and Filipovic declaring that he will tar and feather himself and run around Amsterdam until he is arrested if he gets “degraded” by Overeem, tensions between the two heavyweights reached a boiling point during Dream 6’s pre-fight press conference Sunday at the East 21 Hotel.

Cro Cop spring-boarded off the news that Sergei Kharitonov's intended opponent, Siala “Mighty Mo” Siliga, was scratched from the card due to a back injury to keep the mind games going with the lanky Dutchman he faces Tuesday in a featured bout.

“Well I've just heard that Mighty Mo is not going to fight since he is injured,” said a serious Filipovic. “We are all professional fighters. I'm ready to jump in, in his place. If Dream agrees, I'm ready to fight two fights tomorrow. It doesn't mean that I underestimate Alistair, I would like to fight him first –- the fourth fight against him and the eleventh fight against Sergei. Sergei definitely trained hard for this and I'm sure he doesn't want to go home without a fight.”

Feeling nothing but slighted by the offer, Overeem had a terse reply.

“I think after I fight Mirko, he will never fight again,” said Overeem before throwing down the microphone.

Dream will have no need to take the gung-ho Filipovic up on his offer. American journeyman Jimmy Ambriz has agreed to step in to face the stone-faced Russian Kharitonov on just a few days’ notice.

Also on the menu Tuesday at the Super Saitama arena, semifinalists Gegard Mousasi and Melvin Manhoef collide in one bracket, while Ronaldo “Jacare” Souza meets Zelg Galesic in another to decide who will advance to Dream’s middleweight grand prix finals that same evening. 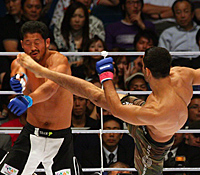 Stephen Martinez/Sherdog.com
"I have the reach advantage and he
gets tired," said Gegard Mousasi of
Melvin Manhoef. "I'm not an easy guy
to knock out and I refuse to go down."
The Armenian-born Mousasi seemed unfazed by inquiries regarding Manhoef’s reportedly improved ground game.

“I know he is well prepared on the ground but I can also fight him standing up,” said Mousasi. “I know that people think that he is much butter standing up but I have the reach advantage and he gets tired. I'm not an easy guy to knock out and I refuse to go down.”

Manhoef, who trained with American Top Team for the bout, took a humorous stance with his recent strides on the mats.

“That’s not true,” said the Dutch knockout artist. “I have no ground game. None at all. I was like, playing the drums. Every one was making me tap the whole time.”

“I trained in San Diego at the University of Jiu-Jitsu with Saulo Ribeiro, Xande [Ribeiro], with Mauricio Shogun [Rua] for about a week and [with] Diego Sanchez,” said Souza. “All of them are good friends and the relationship with the training partners went really well. I’ll put in my heart, I’ll put in my spirit, I’ll put everything in the ring.”

Unshaken by his opponent’s substantial jiu-jitsu credentials, Galesic focused on the opportunity he has been given.

“I come from a small country, from a small town in that country, from small neighborhood and in that neighborhood I live in a small house and for me to be on top of the world and to be called a world champion of Dream is a massive achievement,” said the Croatian. “That will be like a reward for all the hard blood and sweat I spilled over all these years.”

Dream’s Event Producer Keiichi Sasahara and K-1 counterpart Sadaharu Tanigawa have both publicly stated that Dream’s immediate future is hinging on its ability to boost its current television ratings on TBS.

With that, TBS Executive Kazuhiro Namba made the most cryptic comment of all at the press conference.

“Dream was born this year and actually this is the last Dream of this year,” said Namba.

Whether or not this means that there will be no year-end show on TBS is unclear.