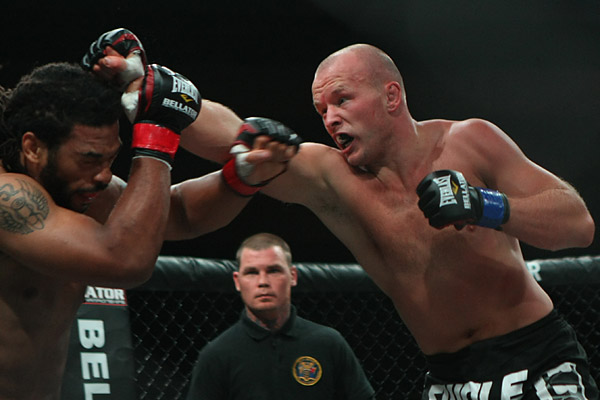 
At nearly seven million square miles, Russia holds the distinction of being the world’s largest country. Not surprisingly, it has given rise to its share of notable martial artists, from three-time Olympic gold medalist Alexander Karelin to former Pride Fighting Championships heavyweight titleholder Fedor Emelianenko.

However, the Russian presence within the Ultimate Fighting Championship remains quite modest. Of the 351 fighters listed on the UFC roster, only four -- lightweights Rustam Khabilov and Khabib Nurmagomedov, featherweight Dennis Siver and bantamweight Azamat Gashimov -- are Russia natives.

The same cannot be said for the Bellator Fighting Championships promotion, which has stepped up its courtship of Russian fighters over the last year. For evidence, one needs only to examine the makeup of its tournament fields. Between Season 5, Season 6 and the 2012 Summer Series, Bellator populated 10 tournaments with a total of 80 mixed martial artists, only two of which were of Russian descent. For its ongoing seventh season, Bellator filled eight-man brackets in four weight classes. Of the 32 total fighters, seven were from Russia. The participation level has moved from less than three percent to nearly 22 percent, and it was no accident.

Bellator CEO Bjorn Rebney points to a television deal he struck in Russia.

“Bellator recently signed the largest television distribution partnership in the history of Russian MMA with Russia 2,” Rebney told Sherdog.com. “Russia 2 is the ESPN of Russia and covers the World Cup, the Olympics, Formula One and so on, so that spectacular television platform, combined with the fact that Russian fighters are some of the most exciting fighters on the mixed martial arts scene today, it just made sense for us to aggressively pursue a group of up-and-coming Russian fighters for this organization.”

Rebney believes his company’s deal with Russia 2 resulted in a ripple effect throughout the sport, particularly in regards to the UFC.

“I think one of the reasons why a lot of the Russian fighters have gone unsigned by the other top promotion in the sport is that the UFC, to date, has not had a prolific, large-scale television partnership in Russia, and we do,” he said, “so Russian fighters will obviously play a huge role for us moving forward.” 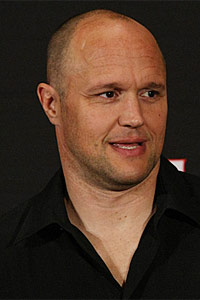 Photo: K. Mills
Bjorn Rebney has been intentional with
his pursuit of top Russian fighters.
Three of the seven Russians entered in Season 7 tournaments advanced at least one round: featherweight Shahbulat Shamhalaev and welterweight Andrey Koreshkov to the finals and heavyweight Alexander Volkov to the semifinals. For Rebney, it has been a worthwhile investment.

“I know our alliance with Russia 2 and the signings of all the top young fighters in Russia has paid dividends already,” Rebney said. “You see it in the ratings and in the response Russian fans have had to the Bellator product.”

Bellator’s ties to the Russian MMA community can be traced to one man: Alexander Shlemenko. A potent and experienced striker, the 28-year-old made his promotional debut at Bellator 16 in April 2010 and went on to win the Season 2 and Season 5 middleweight tournaments.

“Bellator has made a great commitment to Russian fighters,” said Shlemenko, who has won 24 of his last 26 bouts. “It has been a huge stepping stone for Russian fighters looking to fight on a big stage like Bellator.”

Emelianenko’s retirement left the country without an MMA figure in which to place its hopes. The importance of the opportunity Bellator provides has not been lost on Shlemenko.

“Right now, there isn’t a major star in Russia, but Bellator has brought in a lot of new talent in the hopes of creating the next big star, and I think they will,” he said. “I want to say again what Bellator is doing to provide a career for these fighters is a very good thing, and it lets Russia know Bellator is supportive of Russian fighters.”

The platform has done much to raise Shlemenko’s own profile. He has won seven of his eight fights within the promotion, losing only to former champion Hector Lombard. With Lombard having vacated his 185-pound title in order to pursue his career in the UFC, the door appears to be wide open for the man they call “Storm.” On a nine-fight winning streak, Shlemenko will meet Season 6 middleweight tournament winner Maiquel Jose Falcao Goncalves for the vacant crown sometime in 2013 as part of Bellator’s move to Spike TV.

“
Russian fighters
will obviously play a
huge role for us
moving forward.

Rebney admits Shlemenko’s presence has given his company a leg up in terms of luring some of Russia’s top talent to the cage. Koreshkov, for instance, trains under Shlemenko at the RusFighters Sport Club. The undefeated 22-year-old advanced to the Season 7 welterweight tournament final with a brutal knockout against former Dream champion Marius Zaromskis at Bellator 78 on Oct. 26. It was Koreshkov’s eighth first-round finish.

“Shlemenko has been a lynchpin in Bellator recruiting top up-and-coming Russian fighters, including Korseshkov, Volkov and a collection of other top Russian fighters training under Alexander, as well as fighters outside his teaching,” Rebney said. “He has been a tremendous asset for us in Russian territories.”

This article has been revised to reflect the following correction:

An earlier version of this article listed boxer Wladimir Klitschko as having hailed from Russia. He is Ukrainian.