WILMINGTON, Mass. -- Dan Lauzon proved more than ready to step up in competition on Friday, as he engulfed Justin Hammertrum with 45 seconds of power and punches en route to a firm technical knockout win in the main event at World Championship Fighting 5 at the Aleppo Shriners Auditorium.

The post-fight scene felt almost like a sendoff for “The Upgrade,” who will face former International Fight League star Chris Horodecki on the Jan. 24 Affliction card in Anaheim, Calif. Lauzon (11-2) thanked the local promoters for whom he’s fought while building his resume and acknowledged the audience members behind “D-Lo” chants that rung out during the fight. He hugged family members as the audience emptied the building.

“I was nervous before the fight, I’m not going to lie,” Lauzon said. “He had nothing to lose. I love the guy. I’m glad I came out on top.”

Hammertrum (6-7), who entered the ring to the strains of Journey’s “Don’t Stop Believing,” was coming off back-to-back submission wins. Lauzon, cornered by his brother Joe, accepted the bout once the original Oct. 11 date for the Horodecki fight was called off.

Even with a UFC 91 purchase likely in many attendees’ budgets, WCF 5 drew the usually solid crowd of about 3,000. The card was promoted by Joseph Cavallaro, a longtime friend of UFC President Dana White who manages several prominent New England fighters, including Kenny Florian and Marcus Davis. 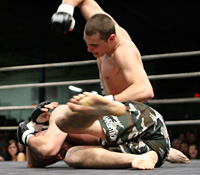 Joe Harrington/Sherdog.com
UFC veteran Dan Lauzon built
on his long win streak.
Also on the card, Calvin Kattar, a former Division I wrestler, brought noisy legions from his nearby hometown of Methuen, Mass., to his fight with double-tough lightweight Bobby Diaz, who had one of the best fights in WCF history against Bobby McMaster in September 2007.

Both gave the crowd something to cheer about, kicking and punching frenetically in a thrilling exchange until Diaz fell into a Kattar (5-1) triangle choke for the tapout 1:21 into the first round. Chants of “Calvin, Calvin” followed. Diaz (5-6), a mouse over one of his eyes, let out an expletive as he exited the ring.

“I just went for it as soon as it hit the ground,” Kattar said. “It was there.”

Promising lightweight John Benoit, out of Renzo Gracie New Hampshire, showed strong jiu-jitsu instincts in maintaining his undefeated record. He locked in a tight anaconda choke on a tough Bill Jones in the first round and worked hard for a fight-ending rear-naked choke about halfway through round two. The end came 1:47 into the period.

“I locked up an anaconda real tight on him,” said Benoit after improving to 6-0. “My arms were garbage after that.”

Hometown boy Dan Bonnell, coming off a 19-second knockout at WCF 4, came from behind to earn a unanimous decision against a tough, compact Josh Spearman in a 135-pound fight. Bonnell (6-4) struggled on the feet in the opening stanza but switched to ground attack to force a third overtime round that he took to close a solid bout.

In a notable undercard outcome, Jose Lopez, of Team Ravenous in Western Massachusetts, made the most of a fight he took on two days notice against Wayne Harnois. Lopez (3-2) landed one of the harder knockouts in WCF history with a head kick that short-circuited Harnois just 35 ticks into round one.

“I’ve got to give myself credit, man,” Lopez said. “That was a good kick.”

World Championship Fighting will return to Wilmington in 2009.