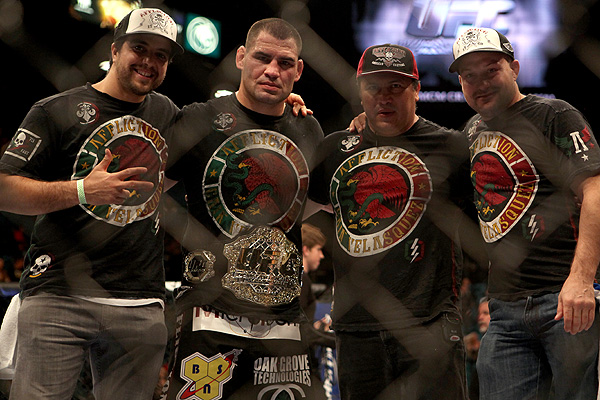 Cain Velasquez was in prime form at UFC 160.


Entering his title defense and rematch with Antonio “Bigfoot” Silva at UFC 160 on Saturday at the MGM Grand Garden Arena in Las Vegas, Ultimate Fighting Championship heavyweight boss Cain Velasquez was a strong favorite. By the time it was over, there was little doubt as to the identity of the best heavyweight mixed martial artist on the planet.

For the second time in the span of a year, Velasquez thrashed Silva. In fact, the American Kickboxing Academy representative has so thoroughly dominated “Bigfoot” in two meetings that the two have yet to fight a full round of total action. Silva was on a roll after wins over Travis Browne and Alistair Overeem, but he was no match for the powerful, explosive champion.

A perfectly timed counter right hand from Velasquez landed on Silva’s jaw, essentially ending the fight. The hulking “Bigfoot” crumbled to his knees, and from there, the champion was all over him like a colony of fire ants. Referee Mario Yamasaki stepped in to save Silva soon after. It was over in 81 seconds.

In the aftermath of such an emphatic victory, the question about who Velasquez will face next inevitably surfaced. Junior dos Santos, Daniel Cormier and Fabricio Werdum were all mentioned and, while there are plenty of solid fighters in the sport’s glamor division, they seem to be the only three candidates currently worthy of the champion’s time.

Photo: Dave Mandel/Sherdog.com
Dos Santos did his part.
Werdum is an intriguing matchup because of his dangerous ground game and vastly improved standup. He has won two straight bouts, including a decisive victory over Roy Nelson, since a loss to Overeem in their 2011 rematch. Unfortunately for Werdum, he has not fought in a year and already has his hands full with Antonio Rodrigo Nogueira at UFC on Fuel TV 10. If Werdum can get past “Minotauro” on June 8, he might be the best option for the champion, even if he is not the most popular.

Cormier is an interesting choice because of the fact that he is unbeaten, owns a tremendous wrestling pedigree and has ascended the heavyweight ranks at a rapid pace. He already has wins over Silva and Josh Barnett, and in his UFC debut in April, he controlled former heavyweight champion Frank Mir from start to finish. The downside: it seems unlikely he will ever agree to face Velasquez inside the Octagon. They train together at the American Kickboxing Academy in San Jose, Calif., and remain close friends. Until Velasquez loses the title or a Rashad Evans-Jon Jones rift develops, Cormier is off the board for now.

That leaves dos Santos, who lit up Mark Hunt in the UFC 160 co-main event. Velasquez handed the Brazilian his first UFC loss and recaptured the heavyweight championship in the process back in December. With that said, dos Santos remains the only man to defeat Velasquez, having knocked out the Californian in November 2011. His victory over Hunt thrusts him back to the front of the line. He rocked the New Zealand native repeatedly and finished Hunt -- who had been knocked out only once previously -- with a spinning hook kick in the third round.

“Cigano” certainly has the tools to wrest the title away from Velasquez yet again. However, Velasquez is the sport’s premier heavyweight, with his combination of speed, athleticism, wrestling, stamina and competitive desire. As it stands, he has an excellent chance to hold on to the heavyweight title for a long time, no matter who rises up to challenge him.

Miscellaneous Debris: Glover Teixeira took another step in the direction of light heavyweight champion Jon Jones with his submission of James Te Huna. The 33-year-old Brazilian jiu-jitsu black belt has won 19 consecutive bouts and looks better every time out. Provided he continues to win, it will not be long before he takes on Jones for 205-pound gold. The Dan Henderson-Rashad Evans matchup at UFC 161 will cross one potential contender off the list, as will the forthcoming rematch between Mauricio “Shogun” Rua and Antonio Rogerio Nogueira. All four are currently ranked in front of Teixeira ... T.J. Grant staked his claim as the top contender for lightweight champion Benson Henderson, as he walked through Gray Maynard in a little more than two minutes. He took Maynard’s best punch, never wavered and proved to be too much for “The Bully” to handle. Grant has won five in a row since moving to 155 pounds. While it could be argued that Anthony Pettis should be next in line for “Smooth,” it is Grant who is now standing on Henderson’s porch. Maynard can only return to the drawing board. He was close to winning the lightweight title twice against Frankie Edgar, but his encounter with Grant’s skilled hands boots him from the discussion in the UFC’s deepest division. Maynard has only one win to his credit since August 2010, and at 33 years of age, one has to wonder whether or not he will ever get back to where he was prior to UFC 160.