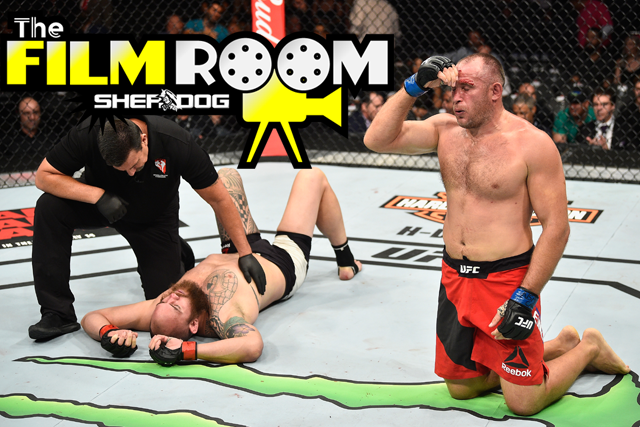 Alexey Oleynik has the biggest fight of his 22-year career this Saturday when he takes on heavyweight legend Mark Hunt in the main event of UFC Fight Night 136 in Moscow. Oleynik wasn’t known to most mixed martial arts fans until his UFC debut in 2014, but he is known outside of the UFC as one of the greatest submission specialists in the history of the sport with a total of 46 sub victories. Today we go over the techniques and strategies Oleynik uses inside the cage.


Oleynik first gained fame in the UFC as the first and only person to finish an opponent with an Ezekiel choke, which he has done twice. The Ezekiel choke is rare even in grappling competitions since you must have large arms and the strength to squeeze for longer than most submissions require. It’s also rare because it requires a fighter to be in a disadvantageous position like bottom full mount to secure it. Notice how Oleynik will lock it up while standing and pull guard to finish the choke. Often opponents don’t know how to defend it and move from half guard to full mount which only makes the choke tighter. But if the opponent stays in half guard, Oleynik can still finish the choke.

The other submission Oleynik is known for is the scarf hold, which is just as rare and hard to secure as the Ezekiel choke. The scarf hold is technically the same choke and uses the same grip as the Ezekiel choke, but it is secured from the side saddle position rather than being on the bottom. The interesting thing about both submissions is the work involved to finish them. If you lock up a clean rear-naked choke the opponent will tap in seconds. The Ezekiel choke and scarf hold require the attacker to constantly adjust the squeeze and angle of the choke to finish it and often takes up to a minute with the choke fully secured to make the opponent tap. Notice how Oleynik is always adjusting position and force of his squeeze before the opponent taps.

But Oleynik doesn't only go for Ezekiel and scarf hold submissions. He has a wide variety of attacks to choose from, including other uncommon submissions in MMA like this north-south choke and inverted straight armbar. Oleynik also has a bulldog choke victory and three heel hook finishes. To put that in perspective, there have only been two bulldog chokes and a handful of heel hook finishes in UFC history.

Although he likes to grab the Ezekiel choke while standing, he has his fair share of takedowns and will pull guard if they don’t work. If Oleynik does go for takedowns, he generally likes to back his opponents to the cage or ropes and throw an overhand right into a double leg. Since his favorite submission requires him to be on the bottom, he is not opposed to pulling guard and will even drop to the ground and invite opponents to play in his guard at times. Hunt has historically struggled on the ground and with submissions so it will be interesting to see how Oleynik plans to turn this into a grappling match.

Oleynik obviously wants to get every fight to the ground, but he does possess a decent overhand right, albeit having nothing else on the feet. Since the threat of his grappling is always there, his opponents don’t focus on his striking where he can catch them off guard with an overhand right. He often sets up the right hand like Wanderlei Silva or Dan Henderson where he will throw a leg kick ahead of the punch. He is also efficient at catching kicks and countering with the right hand over the top.