UFC 105 “Couture vs. Vera” was a solid event. First and foremost, it provided a stage for the company’s U.K. talent, as Englishmen were victorious in seven of their nine bouts on Saturday at the Manchester Evening News Arena in Manchester, England.

Michael Bisping came back strong after the first knockout loss of his career. Dan Hardy graduated from promising prospect to number one contender with a gutsy performance. And Randy Couture again denied Father Time.

Analysis follows for the five main cards bouts from UFC 105, which set the promotion’s all-time attendance record (16,693) for a European event.

What happened: Pearson, “The Ultimate Fighter” Season 9 winner, got his UFC career off to a flying start with an impressive demolition of Riley, a Greg Jackson protégé who has earned his reputation as one of the lightweight division’s most durable competitors. Pearson’s vice-like clinch game made the difference in the bout, as he scored at will with brutal knees and some textbook dirty boxing. With more and more Europeans and their boxing and muay Thai backgrounds entering the UFC, the depth of quality stand-up fighters inside the promotion seems destined to rise.

Forecast for Pearson: The 25-year-old Brit showed why he has earned his “Real Deal” moniker with a performance that was far stronger than expected. As a result, there are a dozen fighters against whom he matches up well. The most intriguing bouts could see him pitted against Spencer Fisher, Jeremy Stephens or Jim Miller.

Forecast for Riley: A veteran of 41 career bouts, Riley has his back against the wall after going 2-2 during his third UFC run. The Herndon, Va., native, who turns 29 in December, could still provide a stern challenge for Mac Danzig or Joe Lauzon.

What happened: Wilks showed strong close-quarters grappling early in the fight, but from the beginning, it became apparent that his wrestling and striking skills were not up to Brown’s level. “The Immortal” threw his punches with more power and landed a fight-changing flying knee 25 seconds into the second round. Badly hurt, Wilks kept his composure and went for broke with an attempted kimura midway through the third round. With that, he expended what was left of his energy. Brown stopped him on strikes from the mount soon after.

Forecast for Brown: After five straight impressive performances by the 28-year-old Ohioan, Brown appears to be ready for greater challenges. A winner from one of three upcoming welterweight battles at UFC 106 -- Ben Saunders vs. Marcus Davis, Amir Sadollah vs. Phil Baroni and Paulo Thiago vs. Jacob Volkmann -- could stand in his way in the 170-pound weight class.

Forecast for Wilks: “The Ultimate Fighter” Season 9 winner fought well, even after his brain was rattled by Brown’s jarring knee early in the second round. Ultimately, however, his weaknesses -- wrestling and punching power -- were exposed. It seems logical to match him against an opponent with a similar grappling-oriented base. Think Dustin Hazelett, Yoshiyuki Yoshida or Dong Hyun Kim. 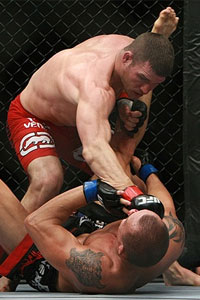 What happened: Kang had the fight under control in the first five minutes, as he knocked down Bisping and ran a jiu-jitsu clinic for the remainder of the first round. Kudos to the Brit for regaining half guard after Kang attempted several mounts. In the second stanza, Bisping landed three successive takedowns, and Kang, a black belt in Brazilian jiu-jitsu, showed shaky work from his guard. Instead of keeping his composure, controlling the hometown hero and forcing a stand-up, Kang ate several elbows and punches before the referee stepped in on his behalf, saving him from further punishment.

Forecast for Bisping: “The Count” utilized potent offensive wrestling and effective defensive grappling, in addition to his solid striking skills. However, he remains susceptible to precise counterpunchers. As a result, he does not fit into the middleweight title picture yet and needs at least one more higher-profile tune-up bout. Patrick Cote and Nate Quarry would stand as worthy adversaries for Bisping at this point in his career.

Forecast for Kang: Widely considered a top five middleweight after a tremendous run inside Pride Fighting Championships in 2005-06, Kang has slipped considerably in recent years. Having posted a .500 record over his last eight bouts, Kang may face elimination from the promotion in his next trip to the Octagon. A veteran of 45 bouts, he could provide a stern test for Kendall Grove, Yushin Okami or the returning Goran Reljic.

What happened: On paper, Swick looked like the more technically advanced martial artist, but Hardy was the better fighter, thanks to his chin, heart, punching power and tenacity. Midway through the second round, he had taken most of the fight out of Swick by changing their bout from a technical battle to a dogged brawl. Hardy put an exclamation point on the victory by taking down Swick and cutting him up with elbows in the third round.

Forecast for Hardy: Behind his clutch performance, Hardy earned a title shot against welterweight king Georges St. Pierre; that five-round bout could come as soon as March. Many will question whether or not such an opportunity has come too early for Hardy, who has enjoyed a comet-like ascent in the UFC.

Forecast for Swick: For the second time in his career, Swick saw a potential title shot slip through his fingers. At 30 and with his history of injury problems, it may prove difficult for him to make a third run at UFC gold. Swick seems more likely to become a gatekeeper deluxe. Potential bouts against Thiago Alves, former World Extreme Cagefighting champion Carlos Condit or Danish standout Martin Kampmann are duels that pique interest.

What happened: Couture did well to implement his game plan, as he muscled Vera against the cage and worked him over with his dirty boxing and knee strikes. However, Vera’s excellent takedown defense and superb bursts of kicks and knees when the two separated threw a wrench into those plans. Entering the third round at one apiece, Couture came out with a stout boxing flurry and seemed unfazed by Vera’s subsequent kicks. Still, the Californian managed to take down Couture in the closing seconds and even secured full mount, though he was ultimately too tired to do any damage. Couture escaped through the back door and by the skin of his teeth on the scorecards.

Forecast for Couture: Matchmaker Joe Silva certainly has plans, which could include light heavyweight champion Lyoto Machida. How about a fight that puts “The Natural” up against fellow hall of famer Mark Coleman? A showdown with “The Ultimate Fighter” Season 8 winner Ryan Bader might also make some sense as a potential passing-of-the-torch match.

Forecast for Vera: The fight against Couture brought out the best in the underachieving Vera. Still, he has another loss to show for his efforts. Instead of sniffing a title shot somewhere down the line, he remains in mid-level obscurity inside the UFC light heavyweight division. Potential matchups for “The Truth” include the losers of the upcoming bouts pairing Luis Arthur Cane with Antonio Rogerio Nogueira, Rashad Evans with Thiago Silva and Forrest Griffin with Tito Ortiz.