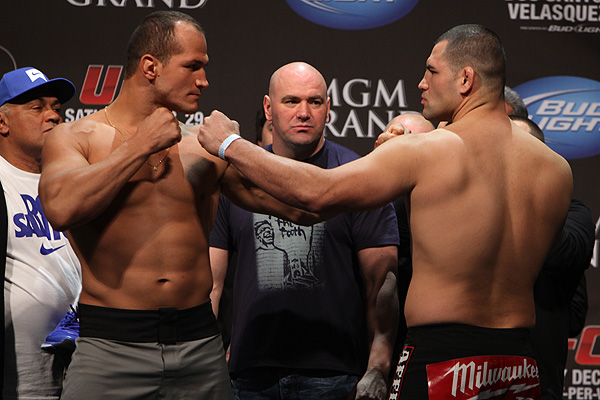 
As it was the last two times Cain Velasquez and Junior dos Santos shared a fight card, the dominant theme to emerge from UFC 160 on Saturday at the MGM Grand Garden Arena in Las Vegas was this: nobody else in the heavyweight division can touch these two right now.

It was clear at UFC 146, where dos Santos toyed with Frank Mir and Velasquez mauled Antonio Silva to set up their December rematch. Yes, it was even evident at UFC 155, where Velasquez landed more than 200 total strikes and 11 takedowns in a five-round shellacking of his Brazilian rival.

At this point, who else in the big boy division is capable of lasting 25 minutes with a champion who is setting such a maniacal pace? Certainly not “Bigfoot” Silva, who has failed to last the equivalent of a single round in two meetings with Velasquez. The first time the American Kickboxing Academy product bludgeoned Silva into a bloody mess, it was to prove the point that he deserved another crack at heavyweight gold. This time, it was about beginning a legacy.

Recently, discussion has begun about whether Velasquez has the potential to eventually become the greatest heavyweight of all-time. Josh Gross of ESPN.com addressed the issue prior to UFC 160, and the topic was also broached during Sherdog.com’s UFC 160 Roundtable. Could a prime Velasquez defeat a prime Fedor Emelianenko? Such a question is probably viewed as heresy by the Pride-never-die crowd, but picking a hypothetical result is already too close to call. For the record, I would favor the wrestler, Velasquez, but only by the slimmest of margins.

In terms of pure accomplishments, however, Velasquez still has many miles to go. It does not make sense to anoint him as the potential G.O.A.T. after one title defense; by beating Silva, he did what he was supposed to do. The heavyweight strap is notoriously difficult to keep, as Velasquez himself learned at UFC on Fox 1, where his first reign ended in 64 seconds.

This is why dos Santos is a key figure in how Velasquez will be remembered -- and vice versa. The Mexican-American cannot be considered the best heavyweight of all-time if he has yet to completely dominate his own era. With the Cain-JDS series tied at one apiece, there are still plenty of questions to answer.

Photo: Daniel Herbertson/Sherdog.com
Emelianenko remains the standard.
Dos Santos dropped the incredibly durable Mark Hunt twice at UFC 160, with an overhand right in the first round and a spinning hook kick in the third. “Cigano” walloped Hunt with heavy punches that would probably fell a lesser man on several other occasions, as well. As Ultimate Fighting Championship light heavyweight Phil Davis so eloquently put it on Twitter, “If [Junior dos Santos] punched me as hard as he just punched [Mark Hunt] I would poop my pants.”

These guys hit hard, which is why the belt changes hands as frequently as it does. With that said, the case can be made that dos Santos deserves to be mentioned in the same rarified air as Velasquez. His resume, which includes wins over Velasquez, Mir, Hunt, Fabricio Werdum, Stefan Struve, Mirko Filipovic, Roy Nelson and Shane Carwin, is arguably better than the champion’s, and his decision to go for the finish against Hunt in the bout’s final minute rather than play it safe suggests a finely tuned killer instinct. If the Brazilian were to take two of three from Velasquez, he would have a legitimate claim to being the guy that could eventually assume the title of best ever.

Given the greater sample size of their showdown at UFC 155, Velasquez has earned the right to be the favorite, but clearly there is plenty of unfinished business between these two.

“It’s a no-brainer,” UFC President Dana White said at Saturday’s post-fight press conference. “If there was ever a trilogy, that’s it right there. They’re the two best heavyweights in the world.”

Could a best-of-five series eventually be in the offing? Considering the status of the rest of the division and with Daniel Cormier beginning a weight-cut plan that includes one more heavyweight bout before a drop to 205 pounds, the idea does not seem that farfetched. One can say that both Velasquez and dos Santos could build interest in a trilogy by fighting different opponents later this year, but why wait? As White said, these are the two best heavyweights in the world.

Werdum is in the conversation if he beats Antonio Rodrigo Nogueira, and Nelson, like Hunt, seems to be the people’s choice, but both have already lost to dos Santos and neither poses as great a threat to the champion as does the man who has already beaten him.

“I feel like I deserve [another title shot],” dos Santos said on Fuel TV. “I want it so bad. I really believe I can be the champion again and I’m one of the best in the division and I can stay on top of this division for sure.”

Emelianenko is a legend, deserving of his mythical status despite stumbling somewhat in the latter portion of his career. “The Last Emperor” had plenty of memorable bouts, but perhaps none benefitted him more greatly than his three meetings with Nogueira in Pride Fighting Championships. Emelianenko was an underdog in their first fight at Pride 25, but he attacked inside the vaunted guard of his Brazilian opponent to win a unanimous decision. A clash of heads resulted in their second bout being declared a no-contest, but the Russian would secure his status as the best of his era in with another unanimous verdict -- this time winning the battle on the feet -- in his third showdown with “Minotauro.” If things had turned out differently, it is possible that Nogueira would be viewed as Emelianenko is now.

In one sense, Velasquez and dos Santos have an advantage over their renowned predecessor. They have already tested one another in ways that no foe was able to test Emelianenko in his prime, as he went unbeaten in 28 fights from 2001 to 2010. The path to unseating Emelianenko as the sport’s greatest heavyweight is long and arduous, and Velasquez and dos Santos need each other if either one is to someday assume the Russian’s throne.

For now, Velasquez-dos Santos is simply the best rivalry in MMA. One day, the better man might also prove to be the best ever.