The man who for years carried the World Extreme Cagefighting banner left the promotion with one more performance by which to remember him.

Former featherweight champion Urijah Faber submitted Takeya Mizugaki in the WEC 52 “Faber vs. Mizugaki” headliner on Thursday at the Palms Casino Resort in Las Vegas. Mizugaki -- who had never before been submitted -- went out on his proverbial shield, rendered unconscious by a rear-naked choke 4:50 into round one.

“The Japanese -- they have that fighting spirit,” Faber said. “This guy is known for being a guy that goes to the very end, so I knew I had to do something drastic and put him out, so I did.”

Faber’s debut at 135 pounds could not have gone better. The Sacramento, Calif., native popped Mizugaki with short right hands and knees and elbows from the clinch. He first threatened with a guillotine choke and then transitioned to Mizugaki’s back when he defended. From there, Faber sank in his hooks and worked for the rear-naked choke. He trapped Mizugaki against the cage, rolled him onto his stomach and waited for the Japanese star to black out.

“I wanted to finish,” Faber said. “I’m a finisher. I think that’s what this division needs.”

The next phase of Faber’s stellar career comes with a transition to the UFC, which will absorb the WEC in little more than a month. He becomes an immediate threat to reigning WEC bantamweight champion Dominick Cruz, a man he submitted with a rear-naked choke in March 2007.

“When I first started fighting, there was no 135-pound class, so it’s not like I had a choice,” Faber said. “I’m at my most competitive weight now. It’s a new era, baby.” 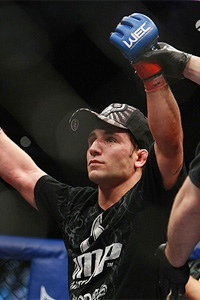 In the co-main event, the undefeated Chad Mendes wore down Javier Vazquez with strikes on the feet and on the ground en route to a unanimous decision. All three judges sided with Mendes by matching 30-27 counts.

Mendes spent much of the match inside the spidery guard of the Brazilian jiu-jitsu black belt. Vazquez was the more active fighter in the first round, as he threatened the decorated wrestler from his back and neutralized his suffocating top game. However, he was fighting an uphill battle.

Mendes stunned Vazquez with strikes as the two featherweights engaged one another standing in round two. A flying knee from Mendes backed up Vazquez and forced the veteran to his back once more. There, Mendes unleashed his ground-and-pound: short elbows and punches that racked up the points and kept Vazquez in a defensive position. Mendes later stood and attempted to compromise the Vazquez guard with a standing front flip. His bid failed, but he moved back into top position.

A head kick from Mendes two minutes into the final period had Vazquez on his heels yet again, and the Team Alpha Male standout followed the strike with a double-leg takedown that all but punctuated his victory. He eventually opened a cut under Vazquez’s eye that had the underdog wincing in visible pain. With that, Mendes passed his latest test.

A last-minute change in opponent did nothing to slow the rise of Erik Koch.

Koch countered a left hook and dropped WEC newcomer Francisco Rivera with an exquisitely timed head kick before he finished the previously unbeaten Californian with hammerfists on the ground 96 seconds into the first round of their featherweight duel.

“That was perfect,” said Koch, who trains and rooms with WEC lightweight contender Anthony Pettis. “I thought that was a pretty good KO.”

Training under former world kickboxing champion Duke Roufus in Milwaukee, the 22-year-old Koch was originally booked to meet top 145-pound contender Josh Grispi. However, following the announcement of the UFC-WEC merger, Grispi was instead moved into a title match against champion Jose Aldo at UFC 122 on Jan. 1.

After a relatively uneventful stand-up engagement in the first round, Benavidez went to work. He lured Fabiano into the first of three attempted guillotine chokes on an ill-advised single-leg takedown. The 26-year-old San Antonio native took a second stab at the submission when Fabiano moved to scramble back to his feet and finished him on the third try, as the Brazilian left his neck exposed one last time.

“I’ve got all sorts of guillotines, so I had to try a few out,” Benavidez said. “He’s a great grappler. He’s a black belt, but [I] got that ‘Joe-jitsu’ on him on that third one, and he finally tapped.”

“I’m always in shape,” Benavidez said. “I thought it was a great matchup for me, so I wanted to take it.”

Overwhelming speed, conditioning and tenacity carried the once-beaten Demetrious Johnson past the world-ranked Damacio Page in a featured bantamweight matchup, as the Matt Hume protégé locked in a fight-ending guillotine choke 2:27 into round three.

Page, who had not competed in more than a year, grounded Johnson with a pair of head-and-arm throws and even mounted the dynamic 5-foot-3 Kentucky native inside the first round. However, Johnson, a man most believe belongs at 125 pounds, grew stronger as the fight deepened. He attacked Page with leg kicks, takedowns and ground-and-pound, ultimately turning the tide in his favor during a brief third-round exchange.

Less than 30 seconds into the final period, Johnson tagged Page with punches and delivered a head kick that put his backpedaling foe on his back. Page never returned to his feet. Johnson deftly moved into position, trapped him in the guillotine as he moved to full mount and solicited the tapout, the Jackson’s Mixed Martial Arts standout’s face contorted by pain and despair.

“I had to be smart and draw him in, then when he came in, take him down,” Johnson said. “He was basically drowning, and I was the shark that came up and got him from underneath.