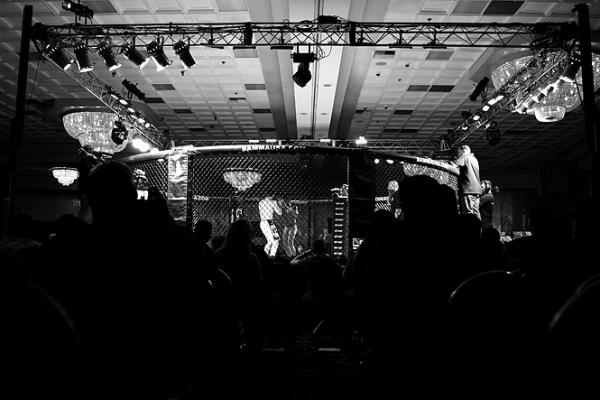 UFC veteran Dennis Hallman picked up the 52nd win of his pro career on Friday night, as “Superman” took a majority decision from Dan Hornbuckle in the main event of Titan Fighting Championship 26 at Union Station Sprint Festival Plaza in Kansas City, Mo.

The result was not without controversy, as referee Mike England halted the bout and took a point from Hornbuckle due to a perceived low blow in the first round. On the instant replay, however, the knee appeared to catch Hallman on the beltline. In his post-fight interview, Hallman asserted that the knee did stray low, stating that the blow clipped the side of his cup.

Hornbuckle did his best to increase his output in the second stanza and began to find his range, landing consistently with clean punches to the head and round kicks to the liver. However, the Bellator alumnus slipped on a high kick attempt, and Hallman jumped into his guard. Though Hallman dealt out little damage, the 37-year-old managed to hold top position for most of the round.

The third period saw Hornbuckle quickly score a takedown, but Hallman reversed the position just as quickly with a guillotine attempt and nearly took “The Handler’s” back. After a period of inactivity, England restarted the men standing, and Hornbuckle did his best to hurt Hallman from the Thai clinch. Hallman tried to pull guard, and Hornbuckle followed him to mat, where he was swept to end the fight. In the end, judges Brett Miller and Henry Gueary scored the bout 29-27 for Hallman, while judge Jackson Harper saw the contest a 28-28 draw.

“Dan hits real hard. We all stand up here and look at the judges’ scorecards, and I won the bout, but we all know who won the fight,” Hallman stated in his post-fight interview. “Give it up for Dan Hornbuckle. [UFC matchmaker] Joe Silva, this is the kind of kid you want in your organization. How about you sign him?”

Kevin Croom took care of business in his co-headlining featherweight showdown with Dustin Phillips, tapping his opponent with a rear-naked choke in just 1:45.

Croom attacked with leg kicks to start the bout, trying to use his length to keep his stocky foe at bay. Phillips searched gamely for an opening to shoot, but that opportunity would never come, as “The Hard-Hitting Hillbilly” locked up a Thai plum and delivered a series of knees to Phillips’ face before flooring him with a short right hand. A barrage of ground-and-pound would follow, as Philips desperately tried to cover up and soon after exposed his back. Croom wasted no time in sinking his hooks and finding his foe’s throat, expertly finishing the fight-ending RNC.

Alex White kept his perfect record intact, as “The Spartan” relieved Roy Babcock of his consciousness in the second round of their welterweight duel.

Babcock proved the aggressor in the bout’s early going, firing off a series of low kicks and connecting with a straight left while avoiding White’s retaliatory efforts. White began to find his range midway through the round and appeared to hurt Babcock with his continual use of body kicks. Though “The Enigma” managed to take White to the mat to end the first frame, he delivered minimal damage despite briefly passing to side control.

White showed excellent takedown defense in the opening moments of round two, making Babcock pay with hard punch combinations after his failed attempts. White then scored his own trip on Babcock, but his fellow Missourian answered with a heel hook attempt. White eventually wiggled his way out of the hold and went to work on Babcock’s body from the turtle position before doing the same after his opponent rolled into guard.

Soon after, White blasted Babcock with a clean left hand to the jaw that knocked him out, unbeknownst to referee Rusty Sullivan, who, despite looking directly at Babcock’s vacant expression, elected not to stop the fight. This forced a reluctant White to deliver another hard shot to his unconscious opponent, at which point the referee inched slightly closer to the clearly unconscious Babcock, but ultimately did nothing. The bell mercifully sounded to end the frame, and White was awarded the knockout victory.

Chance Rencountre emerged victorious in his welterweight showdown with Jason Witt, handing “The Vanilla Gorilla” the first loss of his pro career in emphatic fashion.

Rencountre took the fight to the floor quickly in the first frame, catching a body kick and dumping his foe with a double-leg before fishing for a brabo choke and then a guillotine. Witt would spin out of the lock, however, and landed a solid one-two before being planted once again by a Rencountre takedown. The Oklahoman deftly took Witt’s back during a scramble and threatened with a rear-naked choke, but Witt managed to escape the position and regain his vertical base before rifling off two more solid shots to close out the frame.

Round two would belong to Rencountre, however, as the unbeaten southpaw caught Witt with a sharp counter left straight that buckled his knees. Rencountre swarmed with a violent flurry of punches, pinning the Missourian against the fence and unloading with a series of hard rights that forced referee Sullivan to halt the contest 56 seconds into the second stanza.

Featherweight talent Zach Nolen picked up the third win of his pro career by submitting the previously unbeaten Jeremy Smith in just over two minutes.

Both men came out aggressive to start the contest, with Nolen being forced to defend the jabs and high kick attempts of the longer Smith. In response, the “Z-Man” continually tried to batter his foe with a wild left hand, whiffing several times before finally connecting flush with the haymaker and sending Smith to the canvas. Nolen pounced with a series of short punches and then locked up a measured guillotine attempt to elicit a tap 2:03 into the opening frame.

Ford took control of the fight early in round one, scoring a takedown and passing to side control, where “Crunch Time” tried to frame up an arm-triangle. Though Cooper managed to scramble to his knees, Ford once again found the arm-triangle grip and dragged him to the mat. However, the 34-year-old could not find his squeeze from Cooper’s half guard and released the hold near the end of the round.

Little action would follow in either the second or third rounds, though Ford appeared to clearly take the second frame with his forward movement and aggression. “Super Duper” then responded with a takedown in the third, spending the majority of the round in top position, which proved convincing enough to earn him scores of 29-28 across the board.