WILMINGTON, Mass. -- Rick Hawn, one of the highest-level judokas on the American MMA circuit, showed a well-rounded game in keeping his winning streak alive Friday in the main event of World Championship Fighting 9.

The 33-year-old welterweight, who represented the United States in the 2004 Olympics, notched a workmanlike unanimous decision over Tom Gallicchio of New York’s Team Bombsquad.

Hawn sported a black gi on his way to the ring and a tattoo of the Olympic rings on one of his rib cages. He was especially effective in holding top position and showed some boldness with his hands.

To start the fight, Hawn moved in and out and fired off a hard leg kick followed with an inside punch combination before clinching up and bringing Gallicchio to the corner. After a reset, Hawn floored Gallicchio with a one-arm shoulder throw -- called Ippon Seoinage in judo -- and dropped punches, opening a cut above Gallicchio’s hairline.

“It was just a judo reaction, just muscle memory,” Hawn said of the throw.

In the second, Hawn used a back heel trip to get the fight to the floor, pass guard and threaten with an Americana and short elbows. He took some punches in the third before using a high kick attempt to get the fight back into his world.

Hawn earned 30-27 scores across the board for his sixth professional victory.

“I think I lived up to the expectations of a main event,” said Hawn, who trains under Mark DellaGrotte and four-time Olympic judo player Jimmy Pedro and who also holds a judo win over Karo Parisyan. “(Gallicchio’s) a tough kid. It was a good fight. (MMA) is a different game altogether. There’s more risk out there in being injured. But at the same time, I know how to prepare for stuff like this. I totally worked my striking a little more. My stance was a little different.”

Hawn confirmed after the fight that he has signed to face Abu Dhabi Combat Club submission wrestling champion Braulio Estima on the May 15 Shine Fight pay-per-view card in North Carolina. He said he hopes to hone his striking to keep the fight vertical against the debuting Estima.

Hawn’s win capped a WCF 9 lineup before some 3,200 fans at the Aleppo Shriners Auditorium in Wilmington, Mass.

The card is among the last MMA events that won’t be sanctioned in Massachusetts and not adhere entirely to the unified rules of mixed martial arts (most fights are two rounds, for instance). The state approved regulations for MMA in December, and the new state athletic commission will be activated under the law on Monday. The sport has mostly been self-regulated in the state for six years.

The evening’s co-headliner was cancelled when WEC veteran Mike Campbell dropped out of his fight with Marc Stevens due to a knee injury. That put Renzo Gracie New Hampshire product and WCF fixture John Benoit in the co-main event position against Noah Weisman. 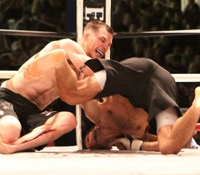 Joe Harrington/Sherdog.com
John Benoit vs. Noah Weisman.
Benoit hit a high-crotch slam in the corner and fended off a triangle attempt while holding top control for much of the lightweight fight’s first round. In the second he used a standing kimura to drag the fight to the ground and then controlled the top as his leg bled from an apparent shin collision.

In the end Benoit bounced back from a submission loss in September to earn the 20-18 nod on all judges’ scorecards.

“We went over everything that could possibly happen,” Benoit said. “There was nothing he could do to me that wasn’t done to me in training camp.”

The fight broke a string of eight consecutive first-round finishes. Among them were former WCF title challenger Dan Bonnell, who put away Cesario de Souza with an overhand right at :32 shortly after touching gloves with him. De Souza seemed to complain that a head clash left him woozy and prone to the KO.