ENOCH, Alberta -- Bobby Lashley continued an impressive start to his MMA career, as he quickly dispatched Mike Cook in only 24 seconds via front choke at MFC 21 “Hard Knocks” inside the River Cree Resort and Casino.

Lashley closed the distance with a right hook that Cook ducked, but then latched on a front headlock and quickly flattened out Cook on his stomach. The 33-year-old wrestler secured the submission in North-South position for the victory.

The former WWE star improves to 3-0, and will face Bob Sapp next on June 27 in Biloxi, Miss., assuming that Sapp emerges from his May 26 fight in Japan injury-free.

At the end of the night, Trevor Prangley knew he had been in a fight. He and champion Emanuel Newton went toe-to-toe for 25 minutes, but it was Prangley who walked away with the light heavyweight title.

In a fight that had a little bit of everything and was much closer than the scorecards indicated, the pair stood and exchanged combos for nearly all five rounds.

The first round was the only one that had any significant action on the ground, but after that it was a race to see who could land the fight-ending punch first. Prangley and Newton closed the distance at the same time, threw three- or four-strike combos, and then backed out numerous times. Both landed clean, heavy blows that would have finished others.

"It was a tough fight," said the 36-year-old Prangley, who moved to 20-5 with the victory. "The first couple rounds I got tired, but in the third I started to come on. He didn’t want to give that belt up easily. He tried to shoot in a few times, but every time it went back to the feet. It was my game plan to stand and trade for the whole time. Wrestling for 25 minutes isn’t fun."

Newton was docked a point for a groin shot in the third round. In that five minutes, Prangley also twisted his ankle when he stepped on Newton’s foot and the injury appeared to hamper the South African fighter slightly for the rest of the fight. 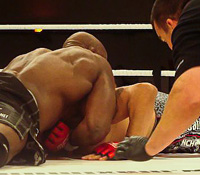 Rob King/Sherdog.com
Bobby Lashley chokes
Mike Cook out cold.
The fight concluded with a bang, as Prangley threw a high kick at the last second that floored the champion. Prangley’s ankle gave out as he threw the kick, leaving both fighters on the canvas as the bell sounded.

"I bent my ankle back in the third and it hurt the rest of the fight,” said Prangley. “Then when I kicked him at the end, that was it for my ankle. I thought I had the decision because he lost a point for the groin shot. But the scorecard doesn’t show how close the fight was. He was a great champion."

Prangley says he looks forward to returning to the MFC to defend his title, but he might score a bout in Strikeforce before then.

John Alessio scored a much-needed win with a quick submission over Andrew Buckland. The veteran fighter took the fight to the ground, where he had a clear advantage over the Calgary-based prospect. Buckland (8-4) ended up giving Alessio his back following a scramble and Alessio quickly slapped on the fight-ending rear-naked choke in just 2:53.

"It went pretty well how I wanted it too," said the 11-year veteran. "He came out and threw a few kicks and then I saw my opportunity and I threw a shot and it went to the ground. I went for a side choke and then worked it around to the back and finished it from there."

The victory earned Alessio (25-13) the “Submission of the Night” bonus, and allowed him to bounce back from consecutive losses to Paul Daley in December and Andre Galvao in the Dream’s welterweight grand prix last April.

Travis Galbraith and David Heath put on an entertaining bout that was a carbon copy of the main event. Both strikers dove in at the same time and delivered combos before backing out. The fight was marred by two low blows to Heath, which led to some heated verbal exchanges between them throughout the fight.

Pride veteran Galbraith (17-6) walked away with a split decision victory with scores of 29-28 (twice) and 28-29. Disgusted by the decision, Heath (10-5) quickly vacated the ring following the announcement.

Ryan Jimmo made his long cross-country trek from Halifax, Nova Scotia worthwhile, as he defeated Mychal Clark by unanimous decision with scores of 30-27 across the board. The TUF 8 veteran pushed his win streak to 10 straight, as he controlled Clark on the ground throughout the three rounds. Other than a couple of kneebar attempts from Clark, Jimmo never appeared to be in any real danger during the fight.

Opening the televised portion of the card for HDNet, Marvin Eastman survived a vicious shot to the groin in the first round to take out rising prospect Aron Lofton with strikes early in round two. A standup battle was expected heading into the bout, but it did not materialize. Eastman took the fight to the ground and pinned Lofton up against the ropes. From there, he rained down blows until referee John McCarthy stopped the fight 59 seconds into the second round.