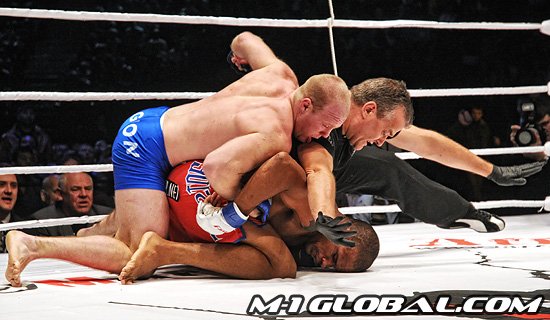 Yuri Ivlev (12-5) handed Ivan Jorge his first loss to stake his team to an early 1-0 lead. Ivlev defended a rear-naked choke attempt and escaped a body triangle to batter Jorge (11-1) for a TKO stoppage late in round two.

Magomed Shikshabekov (6-0) kept his record spotless with a submission win over Gerson Cordeiro (5-9-1) in the first round of their welterweight affair. Shikshabekov locked up a triangle choke at 2:06 to put Russia Legion on the brink of the title.

UFC veteran Ansar Chalangov (11-4) wrapped things up for the home team with a submission win over Danilo Pereira. Chalangov’s heel-hook forced Pereira (16-7) to tap at 4:17 of the first, and cinched the victory for the Russians.