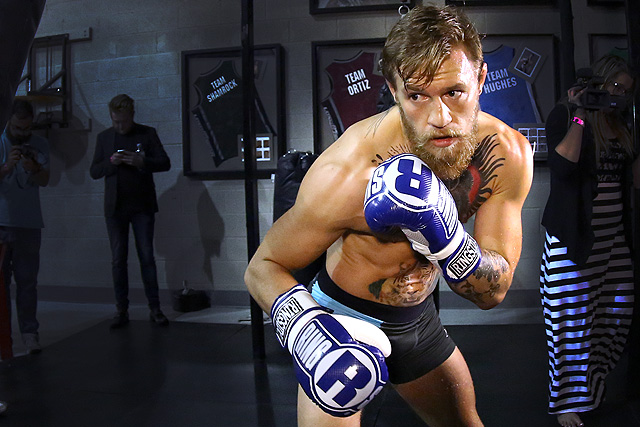 Conor McGregor will get the chance to silence his detractors. | Photo: Dave Mandel/Sherdog.com


The Ultimate Fighting Championship poured millions of dollars into promoting the long-awaited featherweight title bout between longtime champion Jose Aldo and Conor McGregor, only to see it all go up in smoke when a broken rib forced the Brazilian to pull out. Chad Mendes stepped into the breach to replace him in an interim title bout that promises to be excellent, but the card has undoubtedly lost some of its luster.

Luckily, the rest of the UFC 189 lineup packs enough firepower to satisfy even the most discerning connoisseur of violence. In the co-main event, Robbie Lawler defends his welterweight strap against Rory MacDonald, whose rise to the top was prophesied long ago; Dennis Bermudez takes on Jeremy Stephens in an outstanding featherweight clash; Gunnar Nelson draws Brandon Thatch in a battle of two of the best up-and-coming welterweights; blue-chip prospects Cody Garbrandt, Alex Garcia and Thomas Almeida are all featured in showcase matchups; and if that were not enough, action fighters Matt Brown and Tim Means cap off the preliminary festivities.

This is as good as a UFC event can be from top to bottom in 2015, so strap in as we take a look at each and every matchup on Saturday at the MGM Grand Garden Arena in Las Vegas. 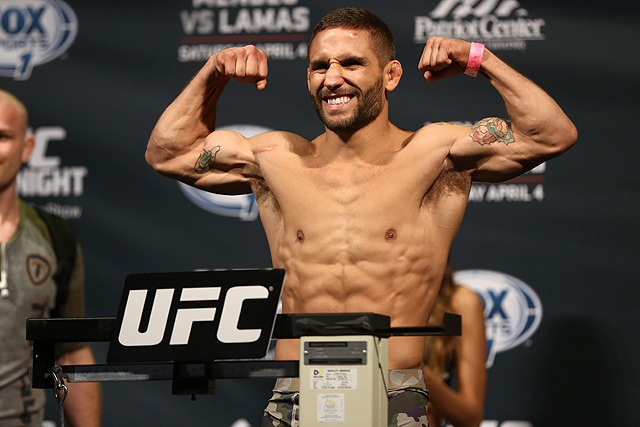 (+ Enlarge) | Photo: Photo: D. Mandel/Sherdog.com
Mendes poses stylistic problems.
THE MATCHUP: Aldo’s decision to withdraw 12 days prior to the biggest fight of the year won him few new fans, but the interim title bout between Mendes and McGregor is nothing to sniff at. Mendes has earned his place as one of the best featherweights in the game, and the matchup itself pits two of the division’s most powerful punchers against each other in what promises to be a barnburner. The American has lost only to Aldo, rebounding from the most recent setback with a brutal knockout win over Ricardo Lamas in April. McGregor has won five straight since debuting in the UFC in April 2013, taking out Dennis Siver and Dustin Poirier in his last two engagements. The stakes here are astronomical: The winner will get a shiny new belt, a shot at Aldo and potentially an enormous payday.

Mendes has evolved into one of the premier punchers in all of MMA, not just in the featherweight division. The basis of his game is slick lateral movement and a tricky rhythm, baiting his opponent’s reactions and then stepping in with vicious head-body combinations from both stances. Mendes is also perfectly comfortable staying in the pocket, slipping his head off the centerline and coming back with sequences of power punches. He is rarely there to be hit, consistently angles out after throwing and excels at moving his head as he throws to avoid counter shots. The only real problem is offensive output; while he is shockingly accurate for someone who operates at fairly long range, he does not throw very many strikes.

Although striking has been his emphasis of late, Mendes’ wrestling arsenal is still everything you would expect from someone who almost won a national title. His signature power double is one of the most powerful and technical in the sport, a marvel of timing, drive and authoritative finishing, and he chains it beautifully with singles and knee taps. Conversely, nobody has succeeded in taking him down during his MMA career. From the top, Mendes mostly prefers to control, landing the occasional shot and hunting for the guillotine from the front headlock when his opponent tries to scramble. It would be nice to see him hunt more for positions like the top ride, where he generates tremendous force in his ground strikes.

McGregor’s game revolves around his pressure, pace and shocking power. A striker by trade and preference, the straight left is at the core of his approach on the feet, and he throws it early and often with outstanding force. The consistent left high kick and jumping knee serve to punish opponents who slip their heads off the centerline or keep a tight guard to avoid the straight. A flashing jab obstructs his opponent’s vision and opens up a clean angle. McGregor is by nature a pressure fighter who likes to push his opponent back toward the fence, and the arsenal of spinning kicks serves to cut off escape angles and limit movement, except into that devastating left straight. His footwork is clean, technical and efficient, and overeager opponents have to deal with a gorgeous back-stepping straight and uppercut. The other real strength of McGregor’s game is his pace. He produces an outstanding volume of strikes, one of the very best in the UFC, and shows no signs of tiring, even when he throws as many as 35 strikes in a minute.

McGregor’s defense is generally sound, though he does occasionally overextend and leave his head forward as he closes the distance with the straight left. As for the rest of his game, we know far less than we might wish. Despite his detractors’ comments on the matter, his takedown defense seems to be perfectly serviceable, with a clean limp-leg and solid sprawl and excellent instincts for hipping out and scrambling back to his feet when planted on the mat. He has a beautiful double-overhooks throw that he likes, a clean double and a nice trip game in the clinch. From top position, he passes nicely and can drop absolute bombs.

THE PICK: Against the injured Aldo, or potentially even the uninjured version, I probably would have picked McGregor to bring the belt back to Ireland. Even on short notice, however, Mendes presents a much different stylistic puzzle. His crisp lateral movement will make it difficult for the pressure fighter to back him into the cage, and he remains the strongest and most technical wrestler in the division, with the takedown acumen to seriously trouble McGregor and disrupt his rhythm. That last point is essential. In a pure striking matchup, the Irishman will eventually force Mendes to the fence and overwhelm him with volume and pressure. Mendes’ takedowns, however, should prevent McGregor from settling into his preferred rhythm and offensive output. In a slower-paced fight, the brick-fisted Mendes can get his own counter game going, crack McGregor in the pocket and eat up large chunks of time. The pick is Mendes by close decision in a fun, back-and-forth fight.