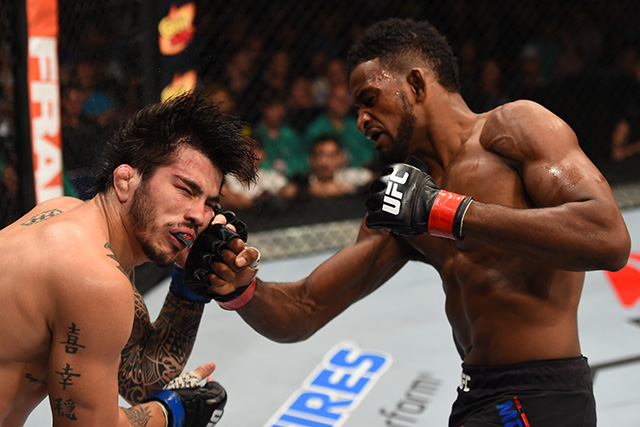 
While the ending was somewhat anticlimactic, Max Holloway continues to make waves in the Ultimate Fighting Championship’s featherweight division. The 23-year-old Hawaiian earned an unexpectedly early victory in the UFC Fight Night Saskatoon headliner on Sunday night when Charles Oliveira succumbed to injury 1:39 into the opening frame.

The future remains bright for Holloway, who joined some exclusive company at 145 pounds division with the victory. Here is a by-the-numbers looks at UFC Fight Night “Holloway vs. Oliveira,” with statistics courtesy of FightMetric.com.

14: Significant strikes landed by Holloway, the fewest by the Hawaiian in nine UFC wins. His previous low of 29 came in a second-round stoppage of Justin Lawrence at UFC 150. Oliveira landed five significant strikes before falling victim to injury.

99: Time, in seconds, of Holloway’s win, the quickest triumph of his promotional tenure. Holloway’s only other first-round finish came at UFC Fight Night “Nelson vs. Story,” where he scored a technical knockout of Akira Corassani at the 3:11 mark of round one.

95: Total strikes by which Neil Magny outlanded Erick Silva in their welterweight matchup. Magny outlanded his foe 53 to 7 in round one, 30 to 10 in round two and 49 to 20 in round three en route to a split decision victory. Magny also outlanded Silva 68 to 29 in significant strikes.

524: Significant strikes landed by Magny in the UFC, No. 10 among active welterweights. Carlos Condit is No. 9 with 585.

27: Takedowns landed by Magny in 12 UFC bouts. Magny landed four takedowns against Silva to move past Demian Maia (25) and John Howard (26) and into a tie with Josh Burkman for sixth place among active welterweights.

0-4: Record for Silva in UFC bouts that go past the opening stanza. All six of the Brazilian’s Octagon wins have come inside of a round.

9: Fights in 18 months for Magny, whose prolific run began with a unanimous decision win over Gasan Umalatov at UFC 169. The Grudge Training Center product is 8-1 during that time, with his only loss coming against Demian Maia at UFC 190.

7: UFC co-main events, of the 25 three-round co-headliners scheduled since January, that have ended in a finish. Magny’s three-round verdict over Silva was one of 18 co-features to go the distance.

2,769: Days since Patrick Cote’s last KO/TKO victory in the UFC before his third-round technical knockout victory over Josh Burkman on Sunday night. “The Predator’s” last such triumph in the Octagon came against Drew McFedries in 2008.

39: Professional fights without a KO/TKO loss for Burkman prior to his setback against Cote in his 40th appearance.

0: Significant strikes landed by Tony Sims in the first two rounds of the lightweight clash. Sims rallied to outland Aubin-Mercier 23 to 1 in significant strikes in the final frame but ultimately faltered by allowing his opponent to take his back late in the period.

19:06: Combined time in which Moroz finished her first six professional opponents prior to facing Letourneau. The 15 minutes the Ukrainian fighter spent in the Octagon in defeat against Letourneau was by far the most of her career to date.

3: Consecutive KO/TKO defeats in the Octagon for Sam Stout, who was stopped by Frankie Perez 54 seconds into the opening frame of their lightweight encounter on Sunday night. “Hands of Stone” has also suffered knockout losses against Ross Pearson and K.J. Noons during his current skid.

30: Professional fights prior to those setbacks without a knockout loss for Stout, who made his professional MMA debut in 2003.

19: First-round finishes for Nikita Krylov, who earned his fourth such victory in the Octagon with a rear-naked choke submission of Marcos Rogerio de Lima 2:29 into the opening stanza. It was Krylov’s 12th career submission victory overall.

12: Takedowns successfully defended by Shane Campbell in his unanimous decision victory over Elias Silverio in a lightweight clash. Silverio landed just two of his 14 takedown attempts in the fight.