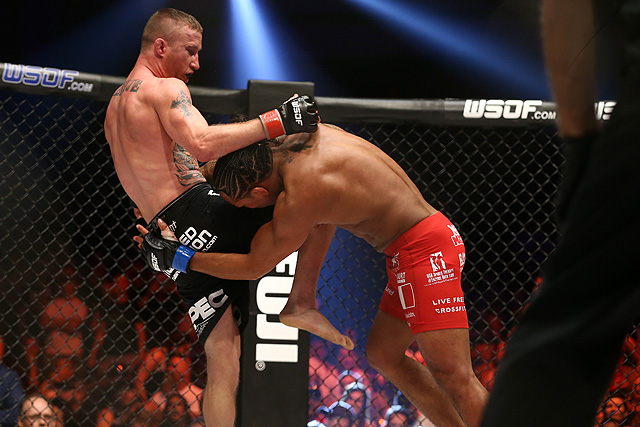 Justin Gaethje and Luis Palomino will square off for the second time in six months. | Photo: Dave Mandel/Sherdog.com


Sequels rarely live up to their predecessors, but Justin Gaethje and Luis Palomino hope to buck that trend.

Gaethje will put his unblemished record and World Series of Fighting lightweight championship on the line against Palomino in the WSOF 23 main event on Friday at Comerica Theatre in Phoenix. It will serve as a rematch of their memorable March 28 encounter, which concluded with Gaethje stopping Palomino on third-round leg kicks and punches.

A Grudge Training Center representative, Gaethje has secured 12 of his 14 pro wins by knockout, technical knockout or submission, earning a reputation as one of the most aggressive and violent fighters in the lightweight division. The 26-year-old Safford, Ariz., native wrestled collegiately at the University of Northern Colorado and has compiled a 7-0 record under the WSOF banner. Gaethje struck World Series of Fighting gold in 2014, when he put away Richard Patishnock in just 69 seconds and has successfully defended the title twice since.

With the Gaethje-Palomino championship rematch as the centerpiece, here are 10 facts surrounding WSOF 23:

FACT 1: Gaethje is a combined 21-0 with 18 finishes as an amateur and professional.

FACT 2: Palomino has not suffered back-to-back defeats since he submitted to a John Mahlow rear-naked choke on Dec. 5, 2008 and then dropped a split decision to Estevan Payan on April 3, 2009.

FACT 4: All 10 of the once-beaten Teddy Holder’s fights have concluded inside one round, five of them in 85 seconds or less.

FACT 6: Jackson-Wink MMA prospect Timur Valiev has rattled off nine consecutive victories since he wound up on the wrong side of a unanimous decision against Olle Raberg in his September 2010 professional debut.

FACT 7: Arizona Combat Sports rep Clifford Starks is a perfect 11-0 in fights outside the UFC.

FACT 8: Undefeated Dagestani prospect Vagab Vagabov has executed four submissions among his 15 victories, three of them via guillotine choke.