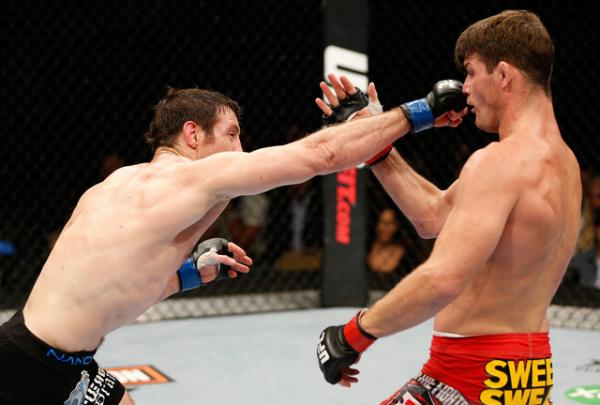 A dogged commitment to takedowns, an oppressive top game and a pocketful of clubbing overhand rights carried Kennedy to a unanimous verdict over Michael Bisping in “The Ultimate Fighter Nations” Finale headliner on Wednesday at the Colisee Pepsi in Quebec City, Quebec, Canada. Scores were 49-46, 49-46 and 50-45, all in Kennedy’s favor.

Bisping lacked his usual venom and vigor in his first appearance in nearly a year. Kennedy grounded “The Ultimate Fighter” Season 3 winner in the first, third and fifth rounds and passed his guard with surprising ease, moving to full mount on multiple occasions. Bisping did his best work in the second round, where he picked up the pace, kept Kennedy off-balance and denied the Jackson-Wink MMA representative’s takedown attempts. Still, it did little to curb Kennedy’s resolve.

The one-sided victory over Bisping will likely do wonders for Kennedy’s stock within the division. The 34-year-old has delivered wins in eight of his past 10 bouts, losing only to former Strikeforce champions Luke Rockhold and Ronaldo Souza. Having cracked the top 10 at 185 pounds, Kennedy figures to catch another marquee matchup the next time he sets foot inside the Octagon. Gegard Mousasi and Mark Munoz will duke it out at UFC Fight Night 42 on May 31 in Berlin, with the winner emerging as an intriguing option for the surging Kennedy.

Bisping’s immediate future seems far less clear. At 35 and with a career-threatening eye injury in his rearview mirror, one has to wonder how long “The Count” can operate at an elite level. His next outing, perhaps against the loser of the forthcoming UFC 172 showdown between Rockhold and Tim Boetsch, could prove telling. Though Bisping’s 14 victories inside the Octagon rank eighth on the Ultimate Fighting Championship’s all-time list, he has not posted consecutive wins since December 2011.

In wake of “The Ultimate Fighter Nations” Finale, here are five other matchups that ought to be considered:

Patrick Cote vs. Thiago Alves-Seth Baczynski winner: Cote has quietly rattled off seven wins in his last eight appearances, and while his days as a serious contender are likely behind him, “The Predator” still has plenty to offer at 170 pounds. The 34-year-old took care of business against opposing “The Ultimate Fighter Nations” coach Kyle Noke in the co-main event, utilizing takedowns and ground-and-pound against the durable Aussie. Cote’s work netted him a unanimous decision. Alves and Baczynski will lock horns at UFC on Fox 11 on April 19 in Orlando, Fla.

Dustin Poirier vs. Nik Lentz-Manny Gamburyan winner: Aggression nearly cost Poirier against “The Ultimate Fighter” Season 14 semifinalist Akira Corassani, as the American Top Team standout marched forward with reckless abandon and walked into a number of power punches from the Swede. The world-ranked Louisianan survived his encounter with Corassani’s fists, scoring a second-round finish with an uppercut to the nose and follow-up punches. The victory moved the 25-year-old Poirier to 8-2 inside the Octagon. Lentz and Gamburyan will face one another at UFC Fight Night 41 on May 10 in Cincinnati.

K.J. Noons vs. Tony Ferguson-Katsunori Kikuno winner: Noons authored his most impressive performance in recent memory, as he knocked out Sam Stout with a right hook and subsequent ground strikes just 30 seconds into their welterweight scrap. The former EliteXC champion has won back-to-back bouts since suffering consecutive decision losses to Josh Thomson, Ryan Couture and Donald Cerrone. Noons now figures to return to his more familiar haunts at 155 pounds. Ferguson and Kikuno will match skills at UFC 173 on May 24 in Las Vegas.

Sarah Kaufman vs. Miesha Tate-Liz Carmouche winner: A former Strikeforce champion, Kaufman recorded her first win inside the Octagon with a lopsided unanimous decision over Leslie Smith. The Canadian overwhelmed Smith with volume and accuracy, unleashing multi-punch combinations to the head throughout the 15-minute clash. Kaufman remains a viable contender at 135 pounds, as her only two official defeats have come to reigning UFC titleholder Ronda Rousey and Dutch stalwart Marloes Coenen. Tate and Carmouche, both of whom were beaten by Kaufman in Strikeforce, will collide in the UFC on Fox 11 co-main event.

Ryan Jimmo vs. Fabio Maldonado: Jimmo won for the 19th time in 21 fights and once again showed a flair for the dramatic, as he knocked out newcomer Sean O’Connell 4:27 into their light heavyweight tilt. The Canadian karateka still has never suffered consecutive losses as a professional. Maldonado, perhaps the best pure boxer on the UFC roster, extended his current winning streak to three fights with a unanimous decision over former Ring of Combat champion Gian Villante at UFC Fight Night 39 in March.