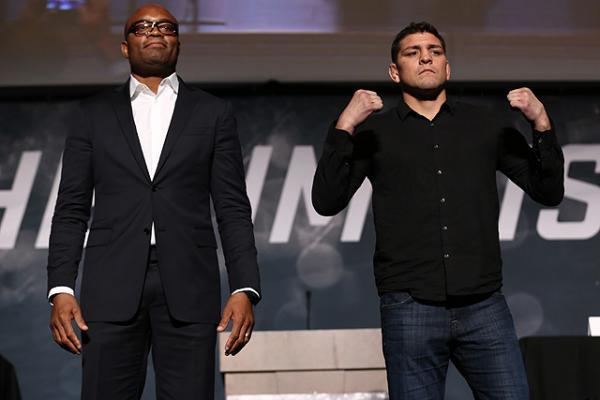 
It was a hypothetical matchup for which fans had long pined, and the Ultimate Fighting Championship has brought it to fruition.

Former middleweight champion Anderson Silva will return to the cage for the first time in more than a year when he battles the always volatile but intriguing Nick Diaz in the UFC 183 main event on Saturday at the MGM Grand Garden Arena in Las Vegas.

Silva, 39, last competed at UFC 168 in December 2013, when he suffered a gruesome leg injury in his rematch with reigning middleweight boss Chris Weidman. Viewed by some as the greatest fighter of all-time, “The Spider” won his first 16 fights inside the Octagon before incurring back-to-back losses against Weidman. Diaz, meanwhile, has not fought in nearly two years. The onetime Strikeforce titleholder last appeared at UFC 158 in March 2013, when he dropped a unanimous decision to Georges St. Pierre in a failed bid to unseat the then-welterweight champion.

Sherdog.com touched base with a number of professional fighters, trainers and MMA personalities to gauge their opinions on the UFC 183 headliner:


Matt Serra: I’ve got Diaz. I think Diaz is going to be in his face, and he’s going to wear him down. He’s younger; his style is relentless; and he gives zero [expletives]. I think he’s going to come forward and barrage him.

Gilbert Melendez: I’m going with Diaz. I think he’s going to take him to deeper waters and try to expose that gas tank a little bit.

Michael Guymon: I think Anderson has a much more versatile game with more weapons to end the fight. Anderson wins by KO.

Joe Duarte: I’m going with Anderson, since Nick is not much of a kicker.

Keith Berry: I’m a fan of Diaz for many reasons, but this fight is tough. I see Silva winning by second-round TKO.

Jason Dent: In my opinion, the fans are the ones who really win in this one, no matter which guy pulls it off. I’m personally going with Anderson in this one, but he will need those nasty kicks and knees he has destroyed so many guys with. If he doesn’t show up looking sharp or 100 percent, we all know Diaz has no problem beating down past legends; just look at the Frank Shamrock fight. I can’t wait to watch this one as a fan, for sure.

Ricardo Liborio: I believe Silva and Diaz will be a very entertaining fight. Why is that? The reason why is Diaz is a real fighter. He will not quit. He will not back down. He will keep coming. The only problem: Anderson Silva is Anderson Silva, and he will be too much for Diaz. I stick with Silva, with the possibility of a knockout. There’s just too much volume and strength and accuracy. It’s going to be hard [for Diaz], but it will be competitive.

Mike Ciesnolevicz: I enjoy watching both these guys compete. I’m glad the UFC made this matchup, but I just don’t see a scenario where Diaz can win it. Anderson is the bigger fighter, has more fast-twitch with his striking and is probably the better wrestler. I believe the Brazilian jiu-jitsu is equal. This is a good comeback fight for Anderson to look impressive. I don’t believe his prior leg injury will be a factor. Hopefully, Diaz can make it a competitive and exciting fight. I will take Anderson by TKO within two rounds.

Gabe Ruediger: I’m going Anderson. Nick is a great fighter and will bring it, but Anderson’s precision and accuracy is better. Also, Anderson has fought at 205 pounds easily, so he will have a huge weight advantage. Nick is as game a fighter as there is out there, but Anderson will be too much.

Ray Elbe: Silva is going to show his leg is healthy and display the need to check low kicks in MMA, repeatedly abusing Nick’s legs. After five rounds of taunting and showboating, Diaz will have lost a decision in a perfect example of a super fight where the fans win.

Jeff Hougland: Diaz wins because he is underrated and I appreciate the way he fights. He deserves to make some GSP-type money, too. So does Nate Diaz.

Igor Araujo: It’s hard to say that someone will knock out Diaz. At the same time, I don’t see how he could beat Anderson. After all the rounds and an awesome fight, my pick is Anderson by decision.

Zack Makovsky: I think this is going to be a fairly short but exciting one. Diaz takes more damage than Silva but gets the win anyway with a TKO.

Mitch Clarke: Silva wins by doctor’s stoppage due to a cut is my guess.

Caros Fodor: Silva wins by KO or TKO in the first round.

Josh Sampo: This is going to be an amazing fight. I think it is going to stay standing and will test both Diaz’s and Silva’s striking skills, not only how well they hit but how well they can avoid that big shot. When it’s all said and done, I feel Diaz has the edge. Diaz will drop and finish Silva late in fourth or fifth round.

Roger Narvaez: One word: wow. This will be epic. I have to give the edge to Silva, but Diaz will definitely be bringing those hands. Both fighters are always down to engage. I think the size and strength advantage will definitely be a factor in this matchup of two legends. Fans win again.

Vitor Vianna: Diaz has no chance against Silva -- no chance. Anderson is bigger and has more guns than him. Silva wins by TKO.

Cody Gibson: Diaz has always been one of my favorite fighters. His brash and honest personality and fighting style have always been inspirational to me. With that said, unless Anderson is really, really past his prime, I can’t imagine Nick having much success here. He does his best work when he presses forward and corners his opponents, limiting their movement and using his boxing. Anderson’s movement is too good to let this happen, and despite the leg injury, I do think he will be throwing his kicks; and we all know the Diaz brothers don’t check kicks. I don’t think Anderson will put him away, but I think he cruises to a decision.

Nam Phan: Diaz is going to “Stockton Slap” the snot out of him. Diaz all the way.

Kyle Kingsbury: I love watching both of these guys, but my lord, it’s the return of Silva. “The Spider” wins via TKO.

Travis Wiuff: I’m taking Silva by referee stoppage in the third round. Diaz is a tough guy and always a game fighter, but Silva will return to look like the old Anderson that ruled the 185-pound division a few years ago.

John Gunderson: I’m going with Diaz just because I always go for Diaz. He’s a great fighter and a warrior. He’s definitely the underdog going against the legend and one of the best ever in Silva, but this is Nick’s glory moment and a fight that will solidify him as one of the top 10 MMA fighters of our time. I say Nick outworks him and gets a late TKO.

Eric Prindle: Diaz will use high volume strikes to negotiate “The Spider’s” superior technique and crafty combinations. The ground battle will be a war of attrition. Diaz, with his granite heart, will outwork “The Spider,” winning the unanimous decision.

Colton Smith: With both fighters being shelved for different reasons, the one constant for both is Father Time. In Diaz you have a fighter who is going up a weight class after being a rather small welterweight to meet the former middleweight kingpin, with the size advantage and well-rounded skillset of “The Spider.” Although I think Diaz will show some durability, I see this being a frustrating evening for the native of Stockton, Calif. Silva wins by decision.

Lou Neglia: I would bet on Silva. I think he’s a great talent. I think Diaz is definitely a tough, talented fighter, but I think Silva is a rare fighter that learned a lot from the Weidman fights. I think you’re going to see Silva buckle down, do some more basic stuff and not showboat as much. I would go with Silva.