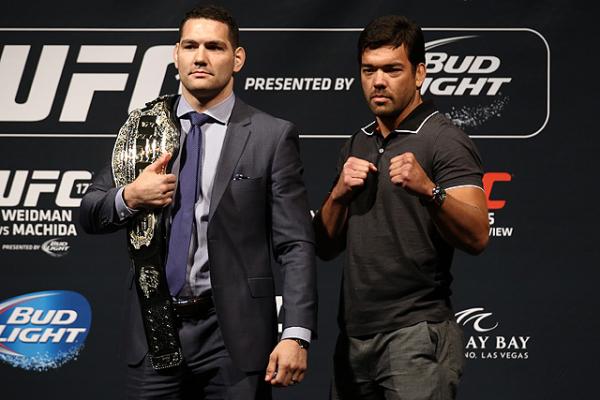 
Even after two victories over the incomparable Anderson Silva, doubters remain.

Chris Weidman will put his unbeaten record and the Ultimate Fighting Championship middleweight title on the line against former 205-pound champion Lyoto Machida in the UFC 175 main event on Saturday at the Mandalay Bay Events Center in Las Vegas.

A Serra-Longo Fight Team representative, Weidman will enter the cage on the strength of back-to-back wins over Silva -- a man many have hailed as the greatest mixed martial artist of all-time. The 30-year-old last fought at UFC 168 in December, when he checked a low kick from Silva, breaking the Brazilian’s leg and resulting in a gruesome technical knockout.

Machida, meanwhile, has delivered victories over Mark Munoz and Gegard Mousasi since downshifting to 185 pounds. “The Dragon” has won five of his last seven fights, losing only to four-time NCAA All-American Phil Davis and reigning light heavyweight champion Jon Jones.

Sherdog.com touched base with a number of professional fighters and trainers to gauge their opinions on the UFC 175 headliner:

Yves Edwards: People think that because Anderson’s reign is over the middleweight title is up for grabs, but I think that’s just wishful thinking. Weidman beat arguably the best mixed martial artist of our lifetime and possibly ever to date twice, on purpose. He may not be as flashy or dynamic as Anderson, but I think he is and will prove to be even more dominant. After Chuck Liddell, the light heavyweight belt was a baton until Jon Jones showed up, and no one saw him possibly losing until Alexander Gustafsson and Daniel Cormier showed up. I think Weidman is the opposite; fans think that Lyoto and Vitor Belfort will destroy him, but my prediction is that the middleweight belt is going through a “Chinese Dynasty” stage, and if Silva’s reign was the Ming Dynasty, I think Weidman’s reign is the Qing Dynasty. That’s my two cents, and I’m putting it on Chris.

Tom DeBlass: I have to go with Weidman by submission in the fourth.

Tony Martin: Machida always is a tough fight with his style of fighting: very elusive and unpredictable. Weidman will use his collegiate wrestling to nullify all of that. I think Weidman cruises to a fourth-round TKO on the ground. 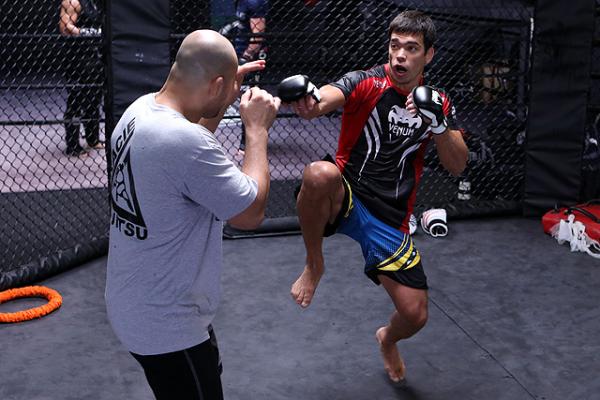 Photo: D. Mandel/Sherdog.com
Machida is 2-0 at 185 pounds.
Cameron Diffley: I think Machida-Weidman is going to come down to Weidman’s ability to establish a takedown threat early and creating positive reactions or Machida being able to establish his footwork and kick game early. I am going with Weidman.

Viscardi Andrade: It will be a great fight, for sure. I believe if Machida wins, it’s by knockout; if Weidman wins, it’s on points.

Brock Jardine: I have to go with Weidman in this one. I mean, he beat Silva twice. It’s hard to pick against him after that.

Daniel Downes: Weidman has certainly evolved into a well-rounded mixed martial artist despite what you might think about his two wins over Silva. Having said that, he still shows some vulnerabilities on his feet, vulnerabilities that I think Machida can exploit. Weidman is a pressure fighter, and he’ll have a hard time avoiding the left cross. Machida counter punches and defends the takedown to a unanimous decision win.

Jason Dent: I think Machida will win by TKO somewhere between the third and fifth round. Machida knows what it takes to be a champion and has excellent takedown defense.

Mike Ciesnolevicz: Well, I picked against Weidman both times he fought Anderson, and both times he found a way to win. Machida is so fast and on point at 185 pounds that I think he is a bad matchup for Weidman. His elusive striking style will present a lot of problems for anyone. Machida is now finally fighting at the weight class he belongs in. He will be difficult to take down and keep down. I see Machida doing to Weidman what everyone thought Anderson was going to do. Machida karate wins by knockout within three rounds.

Ricardo Liborio: Machida win by decision, or Weidman will TKO him: 50/50 there.

Benji Radach: I think Weidman’s sprawling-and-brawling is going to take it, but it’s a very cool matchup. Machida has a very tricky standup, so who knows. We will see who has the more dominant style.

Joe Duarte: This is an interesting matchup because we will have to see how Weidman can adjust to the unorthodox style of Machida. If he can by the end of the first round, I see Weidman walking away with the decision.

Keith Berry: I’m a Weidman fan myself, so I’m going with Weidman by decision. He’s got his hands full with Machida, so it’s an exciting fight either way.

John Gunderson: I’m going with Weidman. I see him using his boxing to close the distance and dirty box and outwrestle Machida. He needs to be careful of Machida’s excellent counter striking for five rounds, if possible, but I think he outworks him.

Kyle Kingsbury: Weidman is the next generation. He will continue to prove he belongs in pound-for-pound discussions.

Mitch Clarke: I’m picking Weidman by decision. I think he’ll be able to read Machida better than his past opponents and not fall for Lyoto’s tricks.

Ray Elbe: Machida has the footwork and ring control to pull off the upset. However, Weidman is just bigger, stronger and faster. I think Weidman puts his wrestling on display and controls the fight from the first round to the end, winning a decision and proving to everyone that the two wins over Silva were no fluke.

J.J. Ambrose: I asked my daughter, Juliet, multiple-choice questions this week. Who’s going to win, by TKO or submission, and why? Her answer was Machida by knockout because he is a ninja. I’m standing by her answer.

Jeff Hougland: I’m surprised you guys keep asking my opinion since I’m like 0-6. I’m going to say Machida wins a decision and then loses the belt in his first defense, starting the old light heavyweight title curse at middleweight.

Igor Araujo: Machida wins by KO in round two.