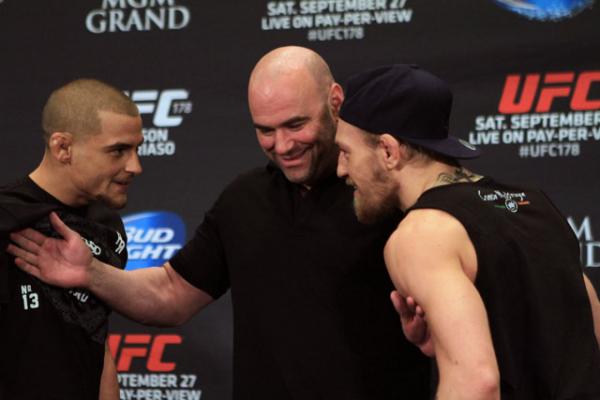 Dustin “The Diamond” Poirier owns an 8-2 mark in the UFC. | Photo: Jeff Sherwood/Sherdog.com


The hype-versus-substance cloud surrounding Conor McGregor will soon be lifted, one way or another.

McGregor will collide with American Top Team’s Dustin Poirier at UFC 178 “Johnson vs. Cariaso” on Saturday at the MGM Grand Garden Arena in Las Vegas. The winner figures to move closer to title contention within the Ultimate Fighting Championship’s featherweight division.

Sherdog.com touched base with a number of professional fighters and trainers to gauge their opinions on the pending UFC 178 clash between two of the sport’s best at 145 pounds:

John Gunderson: I’m going with McGregor. I think his hype train will keep rolling. Even though this will be his toughest test, I believe he has the athletic ability to get the job done.

Nam Phan: I like McGregor to win. He’s fun to watch.

Colton Smith: With all the hype surrounding McGregor, anyone who understands the MMA game should realize someone as skilled as Poirier can and will pose a serious threat to the Irishman. Look to Poirier to exploit holes on McGregor’s game en route to a unanimous decision victory.

Mark Bocek: McGregor wins by KO in round two.

Ray Elbe: McGregor-Dustin Poirier is going to be “Fight of the Night.” McGregor keeps climbing the ladder, and I predict a hard-fought submission win here.

Jeff Hougland: Damn, I like to watch both these guys scrap. I’m going to say “The Diamond” beats McGregor by split decision, and they will get “Fight of the Night.”

Chris Clements: I’m picking McGregor to win this one. I think he will be able to keep the fight standing, and his striking power and accuracy will be too much for Dustin.

J.J. Ambrose: I personally like Poirier because of his experience versus top opponents. McGregor is riding the hype train. If McGregor beats Poirier, I’ll hop on that train, too. This has recipe for “Fight of the Night,” no doubt.

Mitch Clarke: I’m picking Poirier by decision, mostly because he’s more of a proven commodity. I think McGregor is good, but I think “The Diamond” has it.

Tony Martin: I’ve had the opportunity to train with Poirier. I truly believe he will be featherweight champion of the world. He is mean and very talented. He is in the gym all the time and works very hard. We are going to find out very fast if the hype is for real or not surrounding McGregor. I have Poirier winning via third-round TKO in a “Fight of the Year” candidate.

Neil Seery: I’m going with Conor by Irish beatdown in the third round.

Cody Gibson: Fight: McGregor-Poirier. Winner: The fans … and McGregor. Reason: Listen, when McGregor broke onto the UFC scene last year, I was right there with the rest of the naysayers. I thought he was another European loudmouth who is getting hype based more on where he comes from than what he’s done. As time has passed, however, and with each phenomenal performance, that noise is beginning to die down, and I think for good reason. McGregor hasn’t lost a fight in nearly four years, and he’s put everyone he’s fought away within the distance in that time, with the exception of Max Holloway. He injured his knee in that fight and cruised to an easy decision. On the opposite end of the cage is Poirier, who has proven to be a beast in his own right. Both fighters have proven to have knockout power, and both seem to throw caution to the wind and are game to exchange. On the feet, I think this will be a back-and-forth battle, with either man capable of cashing in on a “Knockout of the Night” -- excuse me -- “Performance of the Night” bonus. With that said, the big advantage I give to McGregor is his ability to mix up his striking with his wrestling. While Irish and British fighters have traditionally looked like junior varsity-squad wrestlers, McGregor has shown to be an exception in this department. While I do see this fight ending with one man looking up at the bright lights and wondering where in the hell he is, I give McGregor the slight edge based on his ability to mix up his attacks and keep Poirier guessing. 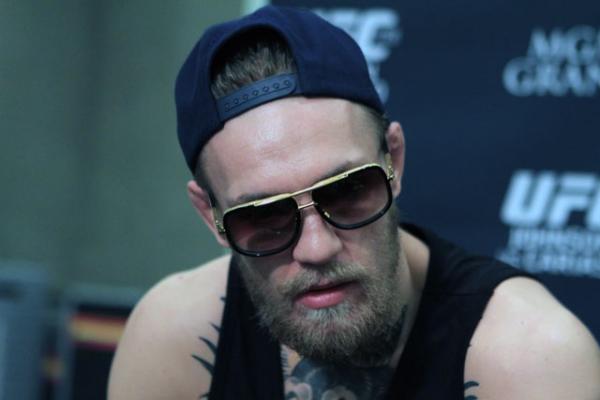 (+ Enlarge) | Photo: J. Sherwood/Sherdog.com
McGregor has won 11 in a row.
Jim Alers: Man, I think everyone knows I want Conor to lose. Poirier will win by submission in the second round. Conor is a great fighter with outstanding standup, but he is only great when he is the bully. He is used to pushing the pace on people without them pushing back. Poirier is the most experienced fighter he has fought and will fight smart. He will meet Conor in the middle and not be intimated. Conor does not do well when he gets hit back. I see Poirier getting the takedowns and then taking the win in the second by rear-naked choke.

Patrick Holohan: Conor is winning that fight by KO.

Eddie Gordon: Tough fight to pick. I think this is the toughest test for McGregor. Poirier is a stud, but I’ve got to go with Conor.

Wilson Reis: I have McGregor finishing Dustin in round two with a TKO. I believe it will be a good first round, but he’s going to win and finish in the second.

James Vick: I’m going with McGregor. He’s such a great salesman of himself, and I’m really starting to believe his hype.

Beneil Dariush: I think Dustin will win a decision. I think his experience in the UFC will be the deciding factor in an exciting fight.

Tom DeBlass: Going to go with Dustin by decision.

Anthony Lapsley: I have to go with Poirier.

Seth Baczynski: McGegor-Poirier is a great matchup. I feel like Conor has a real slick style and a great judge of range with unreadable combos. I like Conor in this fight. Dustin is a great fighter, but this is a tough matchup for him. I think a wrestler will be a harder matchup for Conor.

Alan Joubin: This is a fighter’s fight and a fan’s fight, as well. Both are very equally matched in all areas, except self-promotion; Conor is hands down a leader over most in that category. I’m a fan of both fighters for their exciting in-your-face style, but I have to give the slight advantage to my fellow hometown boy from Lafayette, La. -- Poirier. I think he has a slightly more aggressive submission game than Conor and will look to use it if he gets this fight to the ground. Along with that and having been more proven in the Octagon, I give “The Diamond” the nod in this epic in-your-face bout.

Keith Berry: I really enjoy watching Poirier fight, but I believe he will have his hands full and lose a hard-fought decision to McGregor.

Mike Ciesnolevicz: I’m going to take Poirier in this fight. I think he is more well-rounded and has higher quality training partners. I’m not sold on the McGregor hype. I have not seen anything from McGregor yet that makes me think he is as good as he says he is.

Joe Duarte: Both guys come to scrap, but personally, I prefer the guy who talks less, so I’ll be going with Poirier on this one.

Ricardo Liborio: Dustin is mad and composed at the same time. This will be a hell of a fight. Better not blink. Poirier-McGregor will be a highlight war, and Poirier will win.

Gabe Ruediger: I think McGregor is vastly overrated. That being said, if he beats Poirier, I will admit to being wrong. I think Poirier takes this by submission.

Zach Makovsky: It should be a great fight while it lasts, but I think Poirier gets to keep his head clean on and gets a submission late in the second round.

Mike Richman: I like Conor and his style, but Poirier is a beast, too, and a finisher who is dangerous everywhere. I’m going with Dustin.

Daniel Downes: Those waiting to crown McGregor the next featherweight champ are going to have to wait. Those waiting to crown him “all hype” will have to wait, too. This will be a tough, back-and-forth fight, but Poirier ultimately pulls it out. McGregor’s angles and flash kicks aren’t going to be effective, as Poirier will close the distance, limit the Irishman’s leg strikes and bring the fight to the ground. “The Diamond” uses top control and a power advantage to take the unanimous decision.