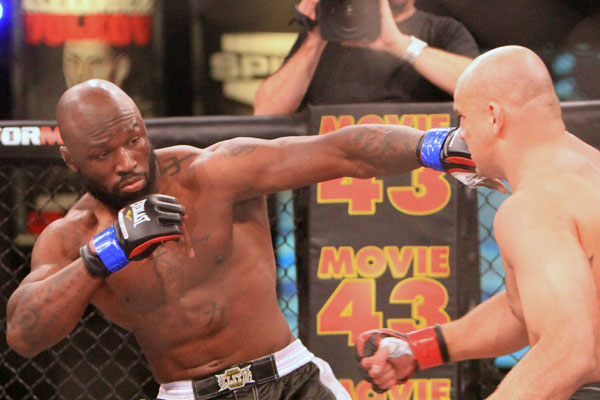 After making quick work of Przemyslaw Mysiala in the opening round of Bellator’s Season 8 light heavyweight tournament, Muhammed Lawal is set to take on Emanuel Newton next on Feb. 21.

Ahead of the matchup, “King Mo” joined the Sherdog Radio Network’s “Beatdown” show to discuss his win over Mysiala, another staph infection scare and more.

On whether he experienced any ring rust after not fighting for a year: “It’s hard to have ring rust when you’re training with guys that are better than you. I train with Roy Nelson. He’s good on the ground. I train with Daniel Cormier. He’s good everywhere -- standing and wrestling. I train with a lot of good people. I’ve trained with Luke Rockhold, who’s good in a lot of places too. Boxing at Jeff Mayweather’s gym, I've trained with high-level boxers. Kickboxing, Kit Cope. These guys are better than me. I went to Mike’s Gym and trained with kickboxers. I’m training with guys that are specialized in certain areas. The ring rust thing, I don’t even consider it a factor. It’s only a factor if you’re not doing anything. With me, I’m always doing something.”

On stopping Mysiala with strikes: “I think he was scared after the first initial flurry because he really didn’t hit me. He was swinging, and I made him miss and I hit him with a left hook. I did a few things in the ring that I’m not going to discuss, but I’ll tell you guys afterwards that I did that only boxers do. I was hitting him with that and I was landing it, and I think that after he started breathing a little bit and I hit him with a few good jabs, he was kind of like, ‘Oh my goodness. I’m overmatched.’”

On having another staph infection scare before the fight: “After I was on the TV show with Batista, we had a staph infection scare. I wasn’t sure -- I was like what the hell? They drained my knee. They thought it was staph infection. They drained it twice just to check and there was staph in the first sample, and in the second sample there wasn’t any staph. Then we flushed my knee out, and I had like two and a half weeks, three weeks to get all the swelling out before I went to wrestling school. And then I went to wrestling school and I did rehab like crazy there and then I was back to normal.”

On Newton: “I’ve trained with him before. He’s a tough dude. He’s been around the game for a while. … He has taekwondo-style kicks, real unorthodox, but he’s a strong dude. Good body clinch.”

On being ready to fight again in a few weeks: “After fights I never took much time off anyway. What I usually do is I travel somewhere else and train somewhere else after a fight. It makes no difference. For this one I can’t do that, so I’m going to go back to the gym, hit the double-end bag, hit the heavy bag, do mitts with Jeff and then I’m going to spar on Wednesday. Tuesday, I’m going to do some grappling. I’m in shape to go 15, 25 minutes already, but the thing is, I’m in shape to go 15, 25 minutes at a pace. I can’t just explode unless I want to, but I think in the finals I’ll be able to because I’ll be built up to that.”