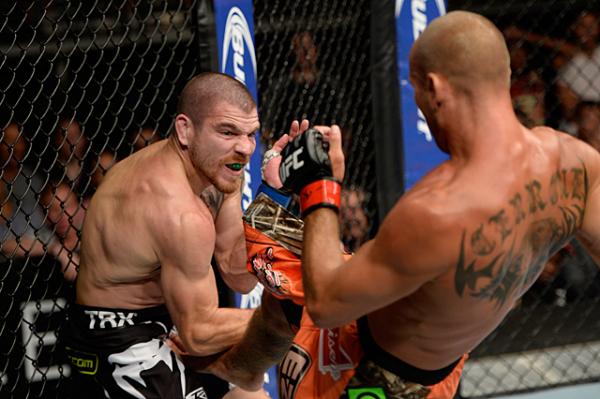 
Donald Cerrone wants to step into the Octagon as often as humanly possible. Lately, that seems to be a good thing for just about everyone but his opponents.

The fun-loving “Cowboy” earned his fourth straight victory at UFC Fight Night in Atlantic City, N.J., on Wednesday night, polishing off Jim Miller with a perfectly-placed head kick 3:31 into the second stanza of their lightweight headliner at the Revel Casino Hotel.

While the Jackson-Wink MMA product admitted to having no preference when it comes to his next foe, it appears that his winning ways have him on the cusp of title contention yet again. Cerrone’s performance capped off a night of spectacular finishes in New Jersey. Here is a by-the-numbers look at UFC Fight Night “Cerrone vs. Henderson.”


15: Post-fight bonuses for Cerrone in Ultimate Fighting Championship/World Extreme Cagefighting competition. He earned a $50,000 “Performance of the Night” award for his spectacular head-kick knockout of Miller on Wednesday night.

12: Finishes for Cerrone, the most of any lightweight in UFC/WEC competition. Nate Diaz is second with 11.

7: Knockdowns landed by Donald Cerrone in his UFC tenure, tying him with Dennis Siver and Jeremy Stephens for No. 5 among lightweights in the promotion.

1: Fighter in UFC history with knockout victories via head kick, leg kick and body kick. Edson Barboza became the first man to accomplish the feat by stopping Evan Dunham with a kick to the body and follow-up punches 3:06 into the opening stanza of their lightweight co-feature. Overall, the Brazilian has four KOs from kicks, also a promotional record.

2: Arm-triangle submission victories in the UFC for Rick Story, who tapped Leonardo Mafra Texeira with the maneuver 2:12 into the second round of their welterweight showdown. Dan Severn, Eric Schafer and Francisco Trinaldo are the only others to earn two wins via arm-triangle in the Octagon. Story’s first such triumph came against Brian Foster at UFC 103.

133: Significant strikes landed by Lineker, tying him with Demetrious Johnson’s effort at UFC 174 for most in a single flyweight bout. However, Johnson’s total came in a five-round affair. Ozkilic, meanwhile, landed 88 significant strikes in defeat.

4: Fighters in promotion history with victories in three different weight classes. Lucas Martins knocked out Alex White 2:08 into the third round of their featherweight clash, giving him wins at 135, 145 and 155 pounds in UFC competition. Diego Sanchez, George Roop and Kenny Florian have also posted Octagon triumphs in three separate divisions.

14: UFC victories for Gleison Tibau, most among any lightweight in promotion history. Tibau outpointed Pat Healy to improve to 14-8 in the Octagon.

75: Career takedowns landed for Tibau, No. 2 all-time in promotion history behind Georges St. Pierre (87). Tibau went 4-for-4 on takedowns against Healy.

4:18:38: Total career fight time for Gleison Tibau, No. 7 in promotion history. The Brazilian spent 15 minutes in the Octagon at UFC Fight Night “Cerrone vs. Miller” to surpass Clay Guida (4:07:35).

1,077: Total strikes landed by Tibau in his UFC tenure. The American Top Team representative landed 87 strikes against Healy to move past Spencer Fisher (1,014) and Nate Diaz (1,048) into fifth place in UFC 155-pound history.

2:24: Time of Leslie Smith’s first-round technical knockout victory over Jessamyn Duke, making it the fourth-fastest stoppage in the brief history of the UFC women’s bantamweight division.

169: Total strikes by which Aljamian Sterling has outlanded his first two UFC opponents. The Serra-Longo Fight Team prospect outlanded Hugo Viana 94-22 en route to a third-round stoppage on Wednesday night. In his Octagon debut, Sterling held a 132-35 advantage in total strikes in a capturing a unanimous verdict over Cody Gibson at UFC 170.

8: Knockouts at UFC Fight Night “Cerrone vs. Miller,” tying it with UFC 92 and UFC on Fox 7 for most knockouts in a modern era event.