Former Ultimate Fighting Championship light heavyweight titleholder Lyoto Machida dazzled in his debut at 185 pounds, as he knocked out Mark Munoz with a first-round head kick in the UFC Fight Night 30 main event on Saturday at the Phones 4U Arena in Manchester, England. Munoz (13-4, 8-4 UFC) met his end 3:10 into round one.

Machida (20-4, 12-4 UFC), who replaced the injured Michael Bisping, began to unravel the Reign MMA representative with a series of searing body kicks. Munoz lowered his hands in response, leaving himself open up top. Machida fired the kick and drove it through the glove of “The Filipino Wrecking Machine,” felling him where he stood.

“It’s very hard for me, because Mark is a friend, but as a professional, I don’t think about that,” Machida said. “Now that everything is over, the friendship will continue. Thank you for fighting me, Mark. I’m sorry about that. It’s the job.”

Machida plans to remain at 185 pounds.


An accidental illegal knee strike from Melvin Guillard resulted in a no-contest against “The Ultimate Fighter” Season 9 winner Ross Pearson in the lightweight co-main event. The unfortunate end came 1:57 into round one, as Pearson (15-6, 7-3 UFC) was deemed unfit to continue because of a gash on his forehead.

“All I can say is that I’m sorry,” Pearson said. “This is not the way I wanted to go out. We’ll do it again in Manchester. Me and Melvin will fight again. I’m disappointed but not beaten.”

Guillard (31-12-2, 12-8 UFC) tagged his British adversary with a few right hands during their brief encounter, utilizing the blinding hand speed for which he has become known. He later pinned Pearson against the cage and executed a pair of knee strikes to the head, one of which landed while the Alliance MMA representative’s hand was on the mat. That made him a downed fighter and led to the stoppage.

“When you’re in here fighting, you’re not thinking about the guy’s next move,” Guillard said. “You’re reacting to what you can do. That’s the nature of being a fighter. If you’re in the ring thinking too much, you’re not winning fights, that’s for sure.”

Manuwa (14-0, 3-0 UFC) wrecked the Canadian karateka’s left leg with knee strikes from the clinch, attacking the inner thigh with power and precision. Everything the Nigerian-born Englishman landed was delivered with purpose and velocity, including thudding kicks to the legs and body. Late in the second round, Manuwa cracked Jimmo with a knee to the face, forcing him to retreat. As the “Big Deal” backed away, his leg gave way and resulted in an anticlimactic finish.

“The fight was going my way,” Manuwa said. “I knew there would be a lot of clinching, but I got the win in the end.” 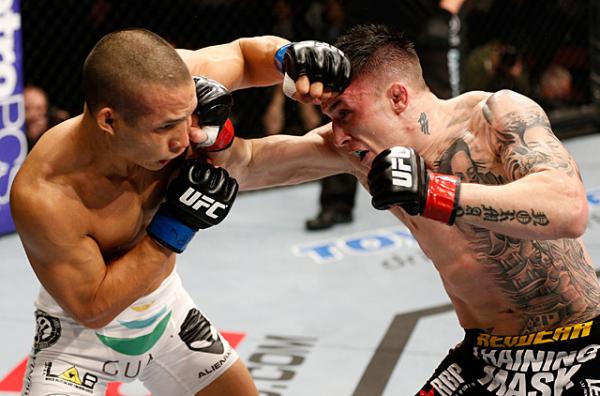 Photo: Josh Hedges/Zuffa LLC/Getty Images
Parke was impressive in victory against Tuck.
“The Ultimate Fighter: The Smashes” winner Norman Parke overwhelmed the MMA Lab’s Jon Tuck with pace and punches, cruising to a unanimous decision in their featured lightweight duel. All three cageside judges scored it for Parke (19-2, 3-0 UFC): 29-28, 29-28 and 30-27.

The bout was competitive for a round. Over the final 10 minutes, Parke found another gear. Punches piled up in combination, and Tuck’s pace slowed. The straight left was Parke’s weapon of choice, although he mixed in kicks and right hands when the opportunities presented themselves.

Tuck (7-1, 1-1 UFC) was often limited to one punch or kick in the exchanges and spent much of the match in retreat mode, unable to piece together meaningful offense.

“I wanted to push the pace and force him to make bad decisions,” said Parke, who has rattled off nine wins in a row. “He was tough and stuck in there. I’m happy with the win, but I wanted to get the finish.”


Swedish newcomer Nicholas Musoke submitted American Top Team’s Alessio Sakara with a first-round armbar in a middleweight showcase. A replacement for injured teammate Magnus Cedenblad, Musoke (11-2-1, 1-0 UFC) coaxed the tapout 3:07 into round one.

The two middleweights traded punches and takedowns during their encounter, each man staggering the other. Roughly midway through the first round, Sakara (15-11, 6-8 UFC) reversed into top position out of a takedown and went to work with his ground-and-pound. Eating elbows from the Italian boxer, Musoke snatched the belly-down armbar in a blink, handing Sakara his fourth straight defeat.

“That’s what I get paid for,” Musoke said. “I have mad respect for Alessio. I tried to study him. I like his style. I heard him tapping out verbally, and I felt his hand on his thigh. I didn’t see the ref around, and I didn’t mean to hold it extra. I just wanted the referee to step in.”


Overweight former Jungle Fight champion John Lineker wiped out Phil Harris with a wicked right hook to the body in the first round of their 128-pound catchweight encounter. Harris (22-11, 1-2 UFC) went down in agony 2:51 into round one

Lineker’s firepower was far too much for the Englishman to withstand. The man they call “Hands of Stone” wobbled Harris on more than one occasion with shots to the head. However, he zeroed in on the body for the finish. The 23-year-old Lineker (23-6, 4-1 UFC), who has missed weight in four of his five Octagon appearances, whipped his right fist into the solar plexus of his counterpart. Harris crumpled at the base of the fence, his night’s work over.

“I’m very happy to get another knockout victory,” said Lineker, a winner in 17 of his last 18 bouts. “I’m very happy to be here right now. That’s the way I fight. I look for the body shots. I know I have heavy hands.”