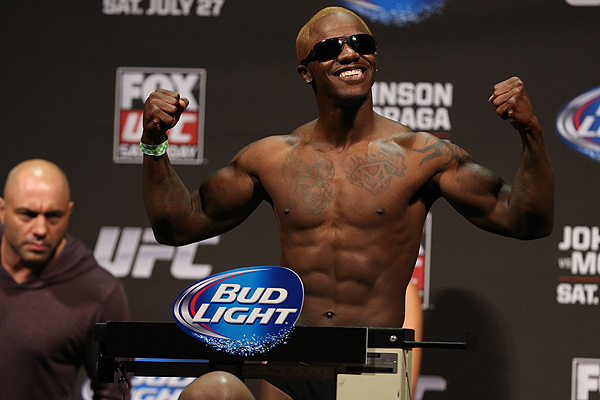 A lightweight rematch between Melvin Guillard and Ross Pearson has been booked for March 8 in the wake of their controversial result at UFC Fight Night 30.

UFC officials Saturday announced that Guillard and Pearson square off again when the promotion returns to London next year. That event will also see Alexander Gustafsson collide with Antonio Rogerio Nogueira in a pivotal light heavyweight contest.

Guillard and Pearson met Saturday night in the co-main event of UFC Fight Night 30 at Phones 4U Arena in Manchester, England, fighting to a no-contest after just 1:57 of action. The fight was halted after Guillard pinned the Englishman against the fence and cracked him with a pair of knees to the head, the second of which was deemed illegal due to Pearson touching his hand to the mat. “The Real Deal” suffered a serious gash on his forehead as a result of the blow, forcing referee Marc Goddard to halt the contest.

Guillard, 30, snapped a two-fight losing streak this past July, when he brutally knocked out Mac Danzig at UFC on Fox 8. Known for his power punching, “The Young Assassin” has earned 20 of his 31 career wins via knockout and has only been knocked out once as a pro.

One year younger than Guillard, Pearson had won two straight fights prior to Saturday’s no-contest, closing out last year with a technical knockout of George Sotiropoulos before stopping Ryan Couture this past April at UFC on Fuel TV 9.